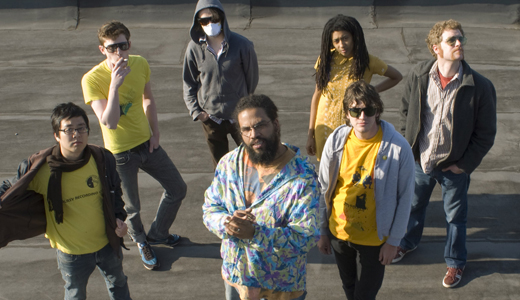 Griffin Rodriguez says he could be making four times the money he makes now, but why? He’s got a studio, The Shape Shoppe in Chicago, and a prolific project in Icy Demons, his collaboration with members of Tortoise and Man Man.

The possibility of a new national mood isn’t lost on Rodriguez. “It’s gonna be intense leaving after the election,” he says.

ID’s third record, Miami Ice, is the product of a collaborative atmosphere. “The band is just borne out of the environment we created, and that’s where the songs come from.”

The Demons stop at Skull Alley (1017 E. Broadway) Thursday, with Royal Bangs, Parlour and The Photographic. The all-ages show starts at 7 p.m. and is $7.

After 10 years in a refugee camp, Maria Ndimuzigo, 49, of Burundi, emigrated to Louisville with her two daughters, Anna Mukeshimana and Regina Singirankabo, in search of a better life. That life ended abruptly for Ndimuzigo last week, thanks to a hit-and-run driver.

Saturday, a benefit concert will take place at Comstock Hall on U of L’s Belknap Campus featuring jazz pianist Harry Pickens. The 8 p.m. concert is free but donations are strongly encouraged.