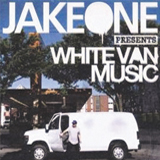 Perhaps it’s because this album has such a stellar lineup that I’m so disappointed. There’s no way all these guys could have brought their best for one album.

The last time hip-hop saw such an effort was Pete Rock’s Soul Survivor in 1998. This album has attempted to mimic that classic, but sadly achieves an astounding level of mediocrity; an album full of good-but-not-great songs by artists I love.

Jake One began his career producing indie rappers and has most recently become a member of G-Unit’s in-house production team. White Van Music combines both of these worlds, with songs featuring MF DOOM, Posdnous of De La Soul, Little Brother, Freeway, Young Buck, Busta Rhymes and Keak da Sneak. The aspiration is admirable, but many of the tracks are so nondescript, they are forgotten as soon as they fade out. White Van begs the argument of whether it’s better to make an album that is truly awful or merely OK. The latter shows potential for better, but there is some level of achievement to missing the mark entirely. Maybe the title tells the tale: No matter how shiny and new a white van is, it’s still a van.