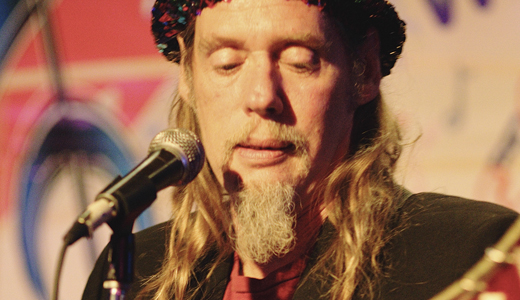 It started with, of all things, a pain in the neck.

A couple months back, former NRBQ member Steve Ferguson decided he’d had enough discomfort and went in for an X-ray and lung exam.

Sure enough, two tumors showed up, and the cancer had attacked his lymph nodes. Last week, Ferguson finished his second round of chemotherapy. Doctors are using 15 percent less radiation than normal so as not to damage the fake valve installed in his heart five years ago.

He’s scheduled for a CAT scan later this month. “We’ll just see what happens,” he says. “The doctors are pretty confident they can shrink them.”
Ferguson’s illness could silence one of the best guitarists ever to pick up a Telecaster.

He once traded solos with Eric Clapton on “Blues 572,” off the 1990 Grammy-nominated release Johnny B. Bad. His Creole-roots album Jack Salmon And Derby Sauce merged, among other styles, Memphis blues and rapid-fire picking.

His 1995 record, Mama-U-Seapa, which he cut with the Midwest Creole Ensemble, earned a four-star rating in Guitar World.

Upon hearing him at a South By Southwest showcase, Rolling Stone’s David Fricke wrote: “Sometimes, if you really want to party, you have to call in an expert … Steve Ferguson turned up at SXSW with his band of hard-bitten blues-rock gangsters, The Midwest Creole Ensemble, and smoked the crowd at Babe’s with a set of hard, funky bed rock ’n’ roll.”

Because of his illness, Ferguson would tear the skin on his fingers if he fretted a string, and he has no singing voice. “It’s pretty simple: I’m not playing at all.”

He bides his time working on a Judeo-Christian prayer book. And that means no income. “I don’t get too many offers here anymore, not because people don’t like me, but because there aren’t any venues for me,” he says, the lone exception being Stevie Ray’s.

Ferguson says he’ll be at Sunday’s benefit at Phoenix Hill in his honor. A $10 donation is encouraged to help Ferguson pay medical bills, and he has posted a link on his MySpace page, myspace.com/stevefergusonrhythmandblues, where friends and fans can donate.

“It hasn’t been hard for me to not think about playing music,” he says. “When you think about where you’re gonna spend life beyond this life, you begin to look at things a lot different.”