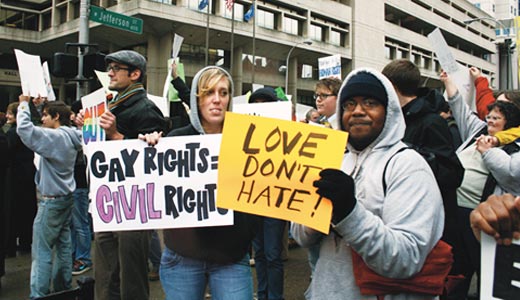 Standing in front of Louisville’s City Hall, more than 200 protestors endure the damp winter cold to denounce the passage of Proposition 8, a constitutional amendment banning same-sex marriage in California. Holding homemade signs that read “Prop 8 = Hate,” “Love is Love” and “Human Right, Not a Heterosexual Privilege,” the crowd echoes chants trumpeted over a bullhorn.

It’s a remarkable turnout, not only because of the inclement weather, but because Louisville has a track record of much-touted protests turning into, well, flops.

But on this soggy Saturday afternoon, the large flock of lively protestors suggests a determined movement is under way.

Motorists honk their horns supportively at the demonstrators gathered downtown, one of at least 150 nationwide protests organized on the Internet by the group Join the Impact, a web-based gay rights organization founded days after Proposition 8 passed.

“Prop 8 means that we’re not equal,” says gay rights advocate Nicholas Moore. “Because we’re gay, we are not considered American citizens deserving the rights everybody else has.”

Similar ballot initiatives banning gay marriage were passed in Arizona and Florida on Election Day; however, much attention has been given to California’s measure because it overrides a California Supreme Court decision that had recognized same-sex marriage as a fundamental right.

“People are scared of gays,” says Moore, who believes 52 percent of Californians voted yes on Proposition 8 because of hateful stereotypes. “I can understand — when all people see of this community is drugs, sex and nightclub bar life — why they would say, ‘Oh my God, no we don’t want them to get married. What about our families and our kids?’ Now is our chance to show the country something better and different.”

Pointing to the crowd encircling half of City Hall, Moore says the election of Barack Obama and the legalization of gay marriage in Massachusetts and Connecticut gives gay rights advocates a glimmer of hope.

“It’s a historic moment,” he says. “It’s the beginning of a civil rights movement.”

Despite the gloomy weather, Curt Morrison, one of the protest organizers, says he was optimistic about the turnout all along. After a classmate at the University of Louisville told him about Join the Impact, he says they decided to announce a local protest on the social network website Facebook. By the end of the day a few hundred had confirmed they were attending.

Such grassroots approaches are key, says Morrison, who believes there should have been more of a focus on lobbying and petitioning in California leading up to Election Day.

“Many groups just kind of bit their lips and focused on the presidential race,” Morrison says. “Now that’s behind us and there’s a ton of enthusiasm and devotion in this community. They’re ready to go back to the basics, let’s get our civil rights.”

Though many gay rights activists are capable and passionate advocates, he says in general their supporters often throw around terms like “bigots” just because they disagree on public policy.

“I hope the tone remains a civil one,” he says. “It’s a discussion we should have in the public arena without name calling or finger pointing.”

The people of California voted in favor of Proposition 8 because, he says, like most of the country they believe families with a married mother and father are the building blocks of society, adding that extending the institution of marriage to gay couples dilutes its sacredness.

Not surprisingly, Morrison disagrees, saying no one group can dilute the sanctity of marriage except the people in it, adding that each couple should be responsible for their own union. “If they love each other, their marriage is going to be strong,” he says. “And that’s all we’re asking is for the same right.”

The backlash to Proposition 8 has sparked a new momentum among gay rights advocates in Kentucky and across the country, according to Morrison. In the coming weeks local activists will focus on lobbying state legislators to petition the General Assembly to legalize gay marriage in Kentucky. It’s an uphill battle he believes they’ll inevitably climb.

“That is going to happen, and they can fight it all they want,” he says. “There’s no way to stop this movement.”