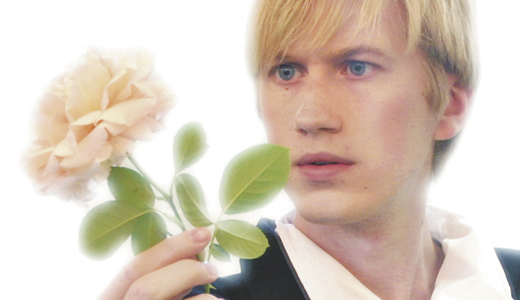 (The University of Louisville presents William Shakespeare’s “Hamlet,” directed by Rinda Frye. Continues through Nov. 9 in the Thrust Theater. For tickets, call 852-6814.)

As vengeful incest stories go, it’s a slow boil — Prince Hamlet takes his sweet time contemplating revenge against his fratricidal uncle Claudius, doodling notes on treachery and delivering artful snark to his hastily remarried mother on her questionable taste in men. While Hamlet’s deliberation is often confused with the spiritual paralysis of a depressed dilettante, the University of Louisville’s production of Shakespeare’s infinitely quotable tragedy instead paints him as an agent of change and action, on a steady course throughout the play to avenge his father’s murder.

U of L faculty director and Shakespeare scholar Rinda Frye, who literally wrote the book on this interpretation, brings an earnest urgency to the production, streamlining the action and stripping it down to the essentials: Hamlet (Brandon Meeks), having returned from university to Denmark after his father’s death, is shocked that his mother Gertrude (a regal Ebony Jordan) married his uncle Claudius (Gerry Rose), the new king, not two months after his father was buried.

He’s a sensitive guy, and when his father’s ghost appears to him and accuses Claudius of murder by poison, Hamlet’s mourning is transformed by anger into something resembling madness. Meeks’ excellent portrayal of Hamlet is both elemental and nuanced, allowing the raw force of grief to power his well-controlled performance.

As the entire court conspires over what to do about the “Hamlet Problem,” he and the few he can trust consider their options for action. After all, you’re not paranoid if they are all out to get you, and in the Danish court, allegiances are shady and up for grabs. In a house where loyalty can be bought and sold with the flick of a wrist, who can you trust?

Hamlet knows he can rely on his old friend Horatio (a stoic DeAldon R. Watson) because he’s a stand-up guy and because, unlike most of the villains slinking around, he’s clean-shaven. Here’s a tip: In this production, if you have facial hair, you’re up to no good. Goof-offs Rosencrantz (Colby Ballowe) and Guildenstern (Corey Music), with their twirly mustaches, are simple pawns of evil. Bearded Polonius (a perfectly obsequious Obadiah Ewing-Roush), adviser to the evil king (who sports a smashing little goatee himself), sells out his own daughter Ophelia (Sarah Carleton) to gain the upper hand against Hamlet while employing spies on his gallant and smooth-jawed son Laertes (Jared Hanlin) from afar, gossiping and eavesdropping his way to an untimely but not wholly undeserved death.

Carleton delivers an eerie performance as a childlike Ophelia gone mad, and it is her suicide that spurs Hamlet and Laertes to act. Their climactic duel leads to a final showdown, and we close with a court in tatters, everyone slain in a final frenzy of poison and swordplay, with only Watson’s loyal and wise Horatio — of course he’s the wise one; he’s still alive, isn’t he? — left standing in the carnage. Watson, released from his phlegmatic constraints by grief, weeps for his friend who died a hero, his actions restoring honor to the state of Denmark.