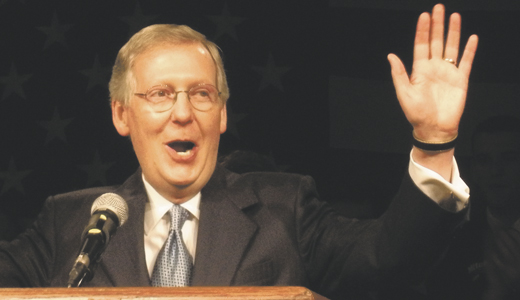 The roaring applause competed with the triumphant blaring of Brooks & Dunn’s hit song “Only in America,” which faded out as the senior senator stepped to the podium. With a tenor of relief, McConnell told the crowd: “Winston Churchill once said that the most exhilarating feeling in life is to be shot at — and missed.”

Leading up to Election Day, the punditry gave Republicans a cloudy forecast at best. Drooling over the prospect of a filibuster-proof 60-seat majority, the Democratic Senatorial Campaign Committee poured $2 million into Kentucky to oust McConnell, and the multimillionaire Lunsford dumped from his own pockets. Along the way, campaign visits from Bill and Hillary Clinton offered the star power many thought would help catapult him to victory.

Many predicted the bellwether for Republicans would be the outcome of the Kentucky Senate race: If McConnell lost, the GOP would be in for a long night.

In the end, the tidal wave that expanded the Democrats’ congressional majorities in both chambers of Congress carried Barack Obama to a historic victory and washed conservative fortresses such as Virginia, North Carolina and Indiana blue. But it didn’t spill a drop in Kentucky. Our conservative majority returned McConnell to Washington for a record fifth term by a decisive 6 percentage points.

McConnell biographer John David Dyche says Republican success in Kentucky speaks directly to and highly of the stature and clout of McConnell, who entered the Senate in 1984.

“Really there’s no Republican parallel to McConnell in Virginia,” Dyche says. “You have a Republican leader here who — love him or hate him — is very good at what he does, and smart.”

Even in the face of a ballyhooed change election, compounded by a 61 percent disapproval rating for President Bush, it’s clear the commonwealth remains deeply conservative.

“The significant thing is not only did McConnell survive, but the entire structure that he built beneath him survived also,” Dyche says. “The Democrats didn’t get the architect or his party during this terrible time for Republicans.”

Democrats in Kentucky failed to make any significant gains in Washington or Frankfort in a year when they were bound for success. Republican state Sen. Brett Guthrie won the highly contested 2nd District congressional race, and not a single Republican state Senate seat was lost.

During the campaign, McConnell’s camp argued clout was more important than change, and it seems Kentucky voters agreed, prompting the question: If the longtime Republican won this race, will he ever lose?

“I don’t think (McConnell’s) impossible to defeat, he’s difficult,” says Thom Karmik, communications director for the Kentucky Democratic Party. “There were some things that didn’t quite add up to beating him (this year).”

Karmik says one of the chief reasons behind Lunsford’s loss was the poor performance and invisibility of the Obama-Biden ticket in Kentucky. An Obama visit to the commonwealth would have had an impact, he says, adding that overall the party needs to improve its statewide organization.

Obama lost to McCain in Kentucky by 16 points, Karmik points out, saying such a staggering defeat at the top of the ticket was tough to overcome. “Still, we have a lot of work to do,” he says. “Our challenge is to bring the Democratic message to a wider group of people around the state. We need a 120-county strategy.”

Returning to Washington as the most powerful Republican in Congress, McConnell now faces a more delicate waltz as leader of a thinning minority. So exactly how will he interact with a Democratic majority and president?

U.S. Rep. John Yarmuth says McConnell knows how to operate on Capitol Hill well enough to wield power even with a smaller minority, but notes that he is returning to very different set of circumstances in the 111th Congress.

“It’s not going to be as easy for him to block legislation that he doesn’t like,” Yarmuth says. “Mitch’s toolbox is a little bit depleted.”

Without a presidential veto behind Senate Republicans, the choice to filibuster important legislation could backfire.

“In terms of Mitch’s personal political future, he has nothing to lose,” Yarmuth says. “But in his position, he has to worry about all of his other members. They may not necessarily want to be seen as obstructionists, or maybe one or two will. He’s got all the personal freedom in the world, but he’s got serious responsibilities.”

Even though McConnell is entrenched for another six years, earlier reports after the election rumored his leadership post might be challenged due to the poor performance of Republicans nationally. McConnell swatted away the speculation, telling the Associated Press he has “overwhelming support” from his Republican colleagues to serve another term as minority leader. His office did not respond to requests for comment for this story.

McConnell also is a man who reportedly thinks about his legacy and the public interest, so some believe he will be willing to work with President Obama on some key issues such as entitlement reform, middle-class tax cuts and a new stimulus package.

Regardless of whether McConnell will meet the Obama administration halfway or lead a militia of conservatives to roadblock the Democratic agenda, the heaviest burden is on the new ruling majority.

Whatever strategy McConnell chooses to adopt, Yarmuth says, everything depends upon how President Obama and the Democrats perform.

“The American people are expecting action,” he says. “They’re expecting their lives to improve because we’re in control. We have no excuses. We’ve got to deliver.”