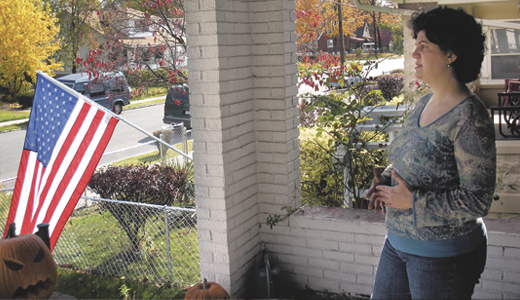 Mariann and Wayne Dunkerley bought a home five years ago deep in west Louisville’s Shawnee neighborhood. Two decades of living in Nashville was enough for Mariann, a Paducah native ready to return to the Bluegrass.

The new house was missing doors, had significant flood damage and rotten wooden floors that had collapsed to the basement, making remodeling a laborious process.

“It was the worst house on the block,” she says. “Only a light bulb was left. We got it for real cheap, but it needed a lot of work.”

By the beginning of winter 2004, the Dunkerleys were just nestling into their home down the street from Shawnee High School when they first noticed an unofficial divide between their neighborhood and the rest of the city.

“People would tell me I lived in the West End,” says Mariann Dunkerley. “I remember thinking, ‘What does that mean?’”

The following summer, they found out exactly what that meant. In April 2005, a pregnant teenager, Romanique Thompson, 17, was murdered two blocks from their home. In June, Christopher Harrison, 20, was shot multiple times one block away. In July, Jacob D. Harvey, 23, was killed around the block, not far from his own home.

“It was tragic,” says Dunkerley, adding that even before that bloody summer, she noticed drug trafficking on her street.

That’s when she decided to contact the Metro Council to ask if there was a block watch she could join. “They said there wasn’t one, but encouraged me to help start it,” she says. “That’s where it all started.”

Not long after launching the block watch, Dunkerly and other concerned residents decided a key to cleaning up the neighborhood was eradicating the corner liquor stores, which seemed to be breeding grounds for drugs and crime. The group petitioned to hold a special election banning liquor sales in much of the Shawnee neighborhood.

The results of the September 2007 wet-dry vote: 86 percent favored banning liquor sales in four precincts (N104, N105, N107 and N109). The election results were entangled in litigation until a judge upheld the vote earlier this year. Dunkerley says voting the four precincts dry was never about putting anyone out of business, and had even less to do with alcohol.

“These liquor stores are set up for single-serving sales,” Dunkerley says. “It promotes a lot of foot traffic and people acting as if they were at a bar. But instead they hang on the corner with their little brown bag.”

Months after the ban was upheld, one of the corner stores, Bakhos El-Khoury, owner of Bakos Liquors, attempted to sidestep the ban by moving his store across the street into a wet precinct. The Louisville Metro Alcohol Beverage Control Board, however, denied El-Khoury’s application for a liquor license, citing “community sentiment” in its ruling. El-Khoury appealed, but last month the Kentucky ABC upheld the earlier decision.

“It all depends on how it’s managed,” Gordon says. “If you go to 34th & Vermont, that’s a nasty liquor store known for people drinking outside, loitering, drugs and gambling. Just a nasty area — period.”

Crime statistics for the four dry precincts obtained by LEO Weekly through the open records law bear most of this out.

The department is neutral on the wet-dry debate, and Gentry wouldn’t say if banning alcohol sales has reduced crime. But she says patrol officers do report noticeably fewer people hanging around liquor stores after dark.

“We’re seeing less loitering around those places,” Gentry says. “The opportunity for crime doesn’t exist as much. It’s not that the owners are bad people or that people who drink alcohol are the ones committing crimes, but there’s less opportunity.”

What’s been effective, Gentry says, is the combination of diligent residents and prevention efforts.

“I would love to take credit for a lot of it,” Gentry says. “But we have people in Shawnee who say, our neighborhood is too good of a neighborhood and we’re not moving out. We’re going to stay here and deal with our issues.”

Councilwoman Cheri Bryant-Hamilton, D-5, who represents the Shawnee neighborhood, says the wet-dry vote was a victory, but what’s going on in her district goes beyond the battle with liquor stores. The next step is drafting a comprehensive neighborhood plan, which west Louisville hasn’t had since 1983.

None of this would be possible, she says, if not for residents like Mariann Dunkerley. Luckily, Hamilton adds, “We have a bunch of Marianns.”

One of the 28 recipients of the 2008 Mayor’s Good Neighbor Award, Dunkerley is set to give a presentation at the Mayor’s Neighborhood Summit on the success of the wet-dry vote. Back in Nashville, Dunkerley was a whispering Republican, never active in politics. Now she’s neck deep in civic servitude as the communications chair for the Shawnee Neighborhood Association and member of the West End Crime Prevention Council.

“I just felt this need to do something,” she says. “After putting blood, sweat and tears into this house, I am not moving. I refuse. I’m just not.”