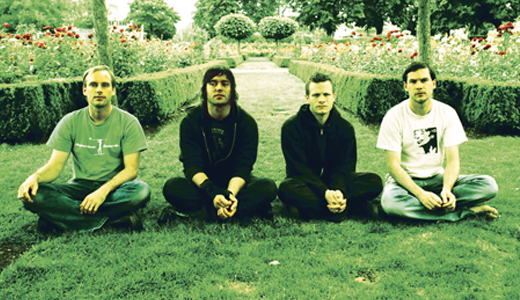 Somewhere between the textured, ambient sounds of electronica and thunder is Grails, trading in noise, a Sabbath-like stomp and hidden beauty.

Instrumental bands risk being written off as excuses for excess musicianship or boorish, drone-like excursions, but Grails captures listeners with its attention to detail and devotion to craftsmanship. No choruses, sure, but there are hooks big enough to catch Moby Dick.

Wednesday, Nov. 12
Tennessee’s Black Diamond Heavies may be just what the doctor ordered. The duo’s minimalist approach to blues and rock is riotous and raucous in its execution.

The sound “is going to be stripped down because it’s the two of us; it’s a pretty primal sound,” drummer and Louisville native Van Campbell says. “We like it that way, because it’s pure and it hits people quickly. We get an immediate response from people, and that’s what we go for.”

Campbell and lead singer/organist John Wesley Myers combine the swing of a satanic Jon Spencer Blues Explosion, the sweaty shake of a church revival and an S&M-laden Misfits concert.

Hot off of an opening stint for Nick Cave & the Bad Seeds in Chicago, as well as a European tour, the band’s buzz is building. Could they be the new torchbearers of post-modern Southern rock?

“People are quick to try to throw a label on anything,” Campbell says. “John is from southeastern Texas. It’s a very Southern community. His father was a traveling Baptist preacher, so this isn’t a put-on. It’s real.”

“A lot of our music starts as a nice bass line, and we build layers upon it until it’s complete. It’s almost like acid jazz,” says Arq Tangent, its drummer, bassist and multi-instrumentalist.

“Rarely ever do we have lyrics on a song,” Tangent says. “Sometimes we have public service announcements between the music when we play live, but most of the time our music is composed like a classical song, where we have a piece of music, and we never come back to it. We view it as almost a movement.”

Not bad for a band built around the quiet guy.

“We are a bass-guitar-centered thing,” Tangent says. “Instead of basing our songs around a guitar riff, lyrics or a verse/chorus/verse structure, we base everything around the bass guitar. It’s really about the groove.”

National Hotel brings their bass-heavy psychedelic groove to the Brick House (1101 S. Second St., 213-0428) along with Sleeping in the Aviary. Tickets are $5.