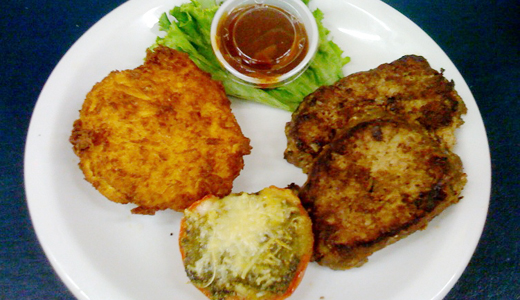 This week let’s make quick visits to a couple of St. Matthews-area eateries where you can fill the tank for a reasonable price and go away satisfied.

Shady Lane Café, a homey storefront nook in Brownsboro Center, qualifies as “old,” sort of, by local restaurant standards: Owners and cooks William and Susi Smith have been doing business in this location going on two years now, and they’ve built a following the old-fashioned way, earning loyalty through a savvy combination of high-quality, down-home fare at a price that’s right, even when there’s not a recession going on.

Sage Indian makes the grade as “new,” sort of: It arrived last month in the quarters vacated by the amiable but short-lived Royal India, which put up the shutters well under a year after it opened last winter.

Sage Indian: The more things change, the more they stay the same

Not much has changed at Sage Indian except, apparently, the management and the sign. Even the telephone number remained.

A few Southern Indian delicacies like dosas and iddlies have disappeared from the menu. That’s a distinct disappointment for me, as I love the less familiar flavors of India’s Deep South. But the rest of the menu — with its standard Northern Indian dishes — doesn’t seem to have changed much at all.

The front room has been equipped with a large, well-stocked bar, giving weight to the subsidiary clause in Sage’s title, “restaurant & bar.” The once-bright lighting has gone dusky, but it’s not so much a romantic dim as an apparent effort to save a few dimes by plugging in 40-watt bulbs. And, although service is certainly correct and formal, we miss the lovable, amiable nature of the former proprietors.

The menu, as noted, closely resembles Sage’s predecessor but for the disappearance of the South Indian specialties, and prices remain attractively affordable, with just about every dish on the menu under $15 and most under $10. A few dishes have actually gone down a few pence (aloo gobi, for example, was $9.50 and is now $8.99; the “non-vegetarian” appetizer platter has dropped from $6.95 to $6.25).

Even trimmed of its regional dishes, the menu remains expansive, with more than 60 dinner dishes — about one-fourth of them vegetarian, as well as broad selections of appetizers, breads and soups. The lunch menu offers two dozen choices — about half of them vegetarian — priced to sell from $5.99 to $6.99, mostly; it’s a few bucks more for “thali” sampler platters.

We dropped by for dinner and found most dishes serviceable but lacking excitement. The vegetarian appetizer platter ($5.95) consisted of five items: vegetable pakoras, samosa, aloo tikki and cheese pakora — most of which proved to be heavy, somewhat greasy deep-fried fritters — plus a pappadam, a thin, rather oily crisp lentil cracker with mild red onion chutney.

A vegetarian dish, channa masala ($8.99), is a hearty, filling dish of chickpeas cooked with onions in a red, spicy tomato sauce. It comes with rice but is traditionally served with pooris (puffy fried wheat bread), so we ordered a pair of the latter ($2.57) and found both greasy and only one puffed.

Seekh Kebab ($13.99) featured ground-lamb meatballs cooked on a stick with onions and green peppers. Served off the skewer, the lamb tasted spicy hot at first, but said heat appeared to be the result of a great excess of salt rather than chile peppers.

We wouldn’t have minded an Indian dessert — I was thinking about a dish of Kheer (rice pudding, $2) — but we were unceremoniously handed the check without an invitation to dessert, so I said the hell with it.

With a large Kingfisher beer for two, the tab (printed on Royal India register paper) came to a fairly reasonable $43.27, plus a $10 tip.

This friendly East End spot has long been a favorite for breakfast and lunch; when my mother and sister arrived ravenous from Florida on a late-afternoon flight, I was delighted to learn that Shady Lane stays open for dinner Tuesdays through Fridays until 8 p.m.

The four of us presented ourselves for duty and had a hard time choosing from all the goodies on the blackboard menu. And fine goodies they are, priced for recessionary times. Sandwiches and specials range from $3.95 (for my mother’s choice, a classic grilled cheese sandwich, molten cheddar spilling over toast grilled to a mouth-watering golden brown) to $6.95 (for my sister’s pick, the cranberry, Granny Smith apple and walnut salad with blue Gorgonzola cheese and Dijon mustard dressing).

Each night offers a different dinner special: On Tuesdays, it’s a varying “comfort food” item, such as chicken pot pie or meatloaf; Wednesday is cheeseburger night; Thursdays are marked as “summer pasta special,” a seasonal riff that I assume will be changing soon; and Friday night brings a fish fry of hand-battered cod.

My wife and I were smitten with the Tuesday meatloaf, which was 10 bucks and change. Two thick, beefy slices were dense and rich, with a small tub of Henry Bain sauce on the side. It was plated with an Italian-style roast tomato topped with pesto and melted Parmesan cheese and what was perhaps the best potato pancake I have ever eaten, a thick patty of grated potatoes (Mr. Smith said he makes them from his morning hash browns) laced with cream and seasonings and deep-fried so the exterior is crisp and golden, the interior creamy and steamy. I could eat about eight of these.

Soup of the day, served in heavy coffee cups with cello-wrapped saltines, was tomato-basil, a thick, textured tomato puree flecked with and redolent of fresh garden basil.

A filling dinner for four came to an eminently reasonable $40, and I couldn’t resist tucking 10 bucks into the tip jar.

In contrast to the customary practice by which a restaurant going out of business slinks quietly away, informing its employees on the last day and posting a “closed for vacation” sign before leaving forever, New Albany’s Speakeasy restaurant and music club is shutting its doors for the last time with all the class of a New Orleans jazz funeral.

No skulking here: Speakeasy proprietor, singer and pianist Lori Tharp is telling the world that Speakeasy goes out with one last party tonight, Nov. 5.

“The Speakeasy is going to throw one last Big Band Dance and Concert with the theme of ‘Party like it’s 1929,’” Tharp said. “Appropriate? Very! It’s the story of people with a very unique dream, a totally unique product, who came this close and, like the recently departed Jazz Factory, will go out with a bang. And, who knows, maybe an investor angel will hear the story and ride in at the last moment.”