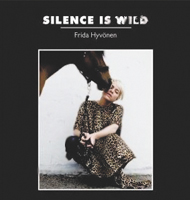 It must be the weather, something in the water or the two-pronged electrical plugs that makes Sweden the current capital of melancholic, poppy female singer-songwriters. There’s the acute introspection of El Perro Del Mar, the underplaying of electronics by Lykke Li and now the narrative compositions of Robertsfors, Sweden’s own Frida Hyvönen.
Her second album, Silence is Wild, brings with it some of the best story-based songwriting in years. The opening track, “Dirty Dancing,” sounds like something Antony and Carole King could have cooked up, chronicling the heartache and young love all through the resemblance to Baby and Johnny in one of Patrick Swayze’s better films. Rather than opting for lo-fi production and introversion, Hyvönen’s album is sweeping and diverse, employing soaring instrumentation that serves as a counterpoint to her natural storytelling ability. This juxtaposition is on full display in the standout track “December.” Behind carnival-esque keyboards, a disaffected Hyvönen tells the story of abortion. It’s an unflinchingly brutal track up there with other bone chillers like Cat Power’s “Names,” proving that Hyvönen’s strengths are in the longing beneath the remarkable stories that she weaves.