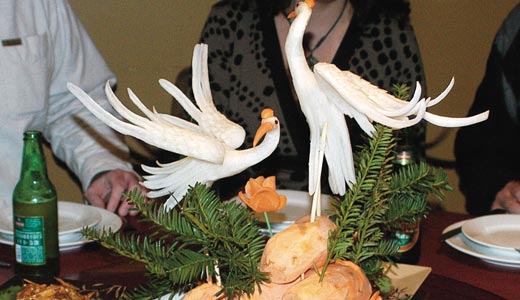 Are you the kind of adventurous diner who has always wanted to experience an authentic Chinese banquet but have despaired after too many meals of sweet and sour pork, fried rice and the like at chopsticks houses and Asian buffets?

Here’s good news: With a little advance planning, a willing spirit and a smile, you can enjoy a Chinese spread right here in Louisville that will take you surprisingly close to what you’d be served in Shanghai or Beijing.

All you have to do is get together a group of like-minded foodies, drop in on your favorite Chinese restaurant and ask the management’s assistance in organizing a special banquet.

This approach probably won’t work at a fast-food Chinese eatery or buffet. It requires a quality Chinese restaurant with a highly skilled chef. Louisville boasts several of these, my current favorite being Red Pepper Chinese on Brownsboro Road, where Sichuanese Chef Shen Hong Huang boasts restaurant experience in Chicago and in Chinese embassies around the world.

Hostess Yuan Hua was eager to help us arrange a Sichuan banquet for 20 members of the LouisvilleHotBytes online forum, a group that would eventually grow to 31 without a hitch. Yuan Hua had just a few simple questions: How much did we want to spend per person, and did we have any specific food requests? After hearing that a local group of doctors had enjoyed a Red Pepper banquet for $25 per, we decided to go for $30 a head, excluding tax, tip and alcohol. As for food requests, we asked only that the chef be asked to prepare a real West China banquet for adventurous foodies, no holding back for American tastes.

A few days later, we confirmed the number in the party, and Red Pepper did the rest, constructing 16 dishes in a dozen separate courses, including a quartet of appetizers, fried and white rice and fruit for dessert.

When our Merrie Little Bande arrived at Red Pepper on a Friday evening, we found three large round tables for 10 set up for our party, each graced with a spectacular centerpiece fashioned from food: On each table, two graceful cranes had been carved from what appeared to be daikon radish; they perched on rocky mountains composed of peeled yams, with sprigs of vegetation that appeared to be rosemary at first but actually proved to be taxus yew branches, perhaps from the shrubbery out front.

Each food sculpture was placed on a lazy susan turntable containing four appetizer courses: Long strips of cool cucumber contrasting with a gentle chile-pepper flavor; cold garlic pork stomach (don’t knock it if you haven’t tried it), flavorful if rather chewy strips of pork infused with subtle spicy heat; Red Pepper’s signature “Unique Chicken Smell,” a succulent dish of hot and spicy chicken strips in a complex hot sauce; and spicy beef, tender strips of beef tossed in a spicy sauce with an orangey touch of citrus flavor. (A second dish brought out for a “satellite table” was dressed slightly differently, with anise-scented “five spice” and sesame seeds.)

Stir-fried lobster, the centerpiece of the meal, arrived early for enjoyment before the diners were sated. Appealing to the eye, cooked lobster had been cut into pieces small enough to handle with chopsticks, “velveted” with cornstarch and stir-fried, served with green onions in a rich gingery sauce. The flavors were great, but most of us Westerners, although relatively handy with chopsticks, found it difficult to separate lobster meat from shell. I gave up the fight and used my fingers to pick up and chew.

One of the more unusual dishes, chicken with sweet potatoes, consisted of bite-size chunks of poultry with bites of tender sweet potato, cooked in an extremely hot and spicy (but delicious) sauce touched with flavors of star anise and a very odd brown pod that the assembled foodies spent a long time trying to identify and that Gary Fox later tracked down online: black cardamom.

Fried rice and white rice were delivered at this point … oddly, I hadn’t missed them with the earlier dishes, which tasted so good that I hadn’t really felt any need to mix them with rice.

Sweet and sour fish may sound like something from a chopsticks house, but “squirrel fish in sweet and sour sauce” was no Americanized dish: Two large, whole fish had been slashed in a waffle pattern, then crisply breaded and deep-fried light golden brown; they swam on a platter atop an intriguing, yummy sauce that Stephen Dennison and others likened to maple syrup; I speculated it might have been a mix of molasses and rice vinegar. The chef, laughing, said it is neither: “Just sweet and sour.” OK, whatever. Dennison declared it his favorite dish of the night.

Baby bok choy, small Chinese cabbages cut in quarters, had been steamed just to crisp-tenderness and infused with the gentle flavors of ginger and garlic and the more assertive flavor of tiny dried shrimp.

Ginger lamb featured bite-size pieces of boneless, tender lamb, stir-fried with squares of red and green bell peppers and a lot of fresh ginger. A LOT. Fine with me … this dish is one of my favorites.

The next dish, “pickle mixed with two seafood delights,” was one of the most challenging, thanks to the presence of fish maw, an offbeat ingredient that rarely shows up on the menus given Westerners in Chinese restaurants. The stomach lining (or, sometimes, air bladder) from a large fish, it’s cut in strips and dried. Chewy and distinctly fishy, it made me think of fish-flavored pork rinds, but reveler Tom Person nailed it with the hilarious description: “chitlin of the sea.” I threatened to steal his line, but fairness requires that I give him full credit. The other “delight” was fresh scallops were pure white and tender, but it was the fish maw that got the attention.

Wrapping up the savory dishes was yet another luxurious delight: tea-smoked duck, the Western Chinese equivalent of Peking duck. Whole ducks had been roasted, then smoked over tea leaves to add a subtle flavor, hacked into smaller squares and served with shredded scallions and sweet hoisin sauce.

We wouldn’t have had room for decadent desserts, but large platters of artfully carved bites of oranges, apples and bananas made a perfect light ending to the most memorable Chinese meal of my life.

With tax, alcohol and a generous tip added to the $30 banquet price, the toll for the evening came to $45 a person. For a meal like this, you’d be hard pressed to match that price anywhere.

And authentic or not, they did bring around platters of cello-wrapped fortune cookies at the end.