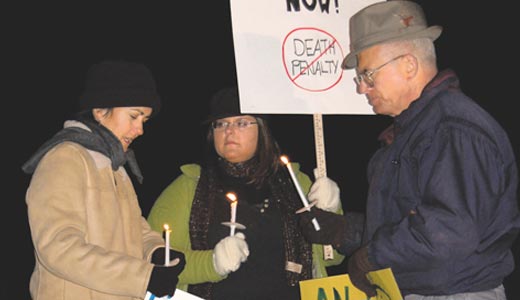 State troopers guard three traffic checkpoints along the winding road that leads to the Kentucky State Penitentiary, which has been on lockdown for 24 hours. The maximum-security prison in rural Eddyville is home to Kentucky’s death row, and for a few more hours, Marco Allen Chapman.

The foreboding stone structure overlooks Lake Barkley, and on this bitter cold evening, the setting sun casts an orange glow on the prison known by locals as “The Castle.”

Tonight, Chapman is scheduled to die by lethal injection at the prison, becoming the first inmate executed in Kentucky since 1999. It’s a fate he has sought since his arrest for killing two children in 2002, after which he waived a trial, pleaded guilty to capital murder and asked to be executed.

In addition to being the first Kentucky prisoner put to death in nearly a decade, Chapman will become the first inmate subjected to lethal injection in the commonwealth since the U.S. Supreme Court ruled in April that the practice is not cruel and unusual punishment. The claim was raised by two other Kentucky death row inmates — Ralph Baze and Thomas C. Bowling — and resulted in an unofficial moratorium on executions for seven months while the high court considered the case.

At about 6 p.m., a crowd of shivering reporters is milling about outside, casually chatting with state troopers as they await a shuttle to drive them to a nearby field where protestors are congregating. Throughout the day, the prison officials have repeatedly briefed the press on Chapman’s status, answering an uncanny number of questions regarding the inmate’s final meal, a bizarre dying wish granted to prisoners on the brink of execution:

What did the meal include? A 32-ounce sirloin steak, 20 butterfly shrimp, iced tea and banana cream pie. What was the cost of the final meal? $31.81. Did Chapman finish all the food? Yes. How was his steak prepared? Medium rare.

Even the state troopers are fascinated with the topic, and one asks, “What would you have for your last supper?” Without hesitation, his colleague responds, “Meatloaf, mashed potatoes and gravy, apple pie.”

Finally, the shuttle arrives and reporters pile in, television cameras taking up most of the room inside the prison van with cages on the windows. Passing by rows of razor-wire fences, the van pulls up to about a dozen demonstrators holding candles and posters.

“I’m here because I want to pray and show my opposition to what is taking place,” says Sister Chris Beckett, a Catholic nun from Louisville who spent years as a prison chaplain, counseling death row inmates here in Eddyville.

In about an hour, Chapman will become the third person executed in Kentucky since the death penalty was reinstated nationwide in 1976. Harold McQueen was put to death in the electric chair in 1997 for killing a store clerk, and Eddie Harper was executed by lethal injection in 1999 for killing his adoptive parents.

Sister Beckett prayed outside the prison during both executions, just as she is doing tonight: “I will be here for as many protests as necessary until we abolish the death penalty. I am hopeful that day will come.”

As the scheduled execution nears, reporters head back to the prison, file into the briefing room and wait. Nine media members were selected to witness the execution, and when it is finished they will brief fellow journalists.

The minutes tick by, and at 7:43 p.m., the media witnesses return to recount what unfolded inside the execution chamber:

The 37-year-old prisoner was strapped to a gurney, his arms outstretched with IVs in each. The warden read a lengthy statement Chapman prepared just hours earlier. In the statement, Chapman repeatedly apologized for his crime on Aug. 23, 2002, when he raped Carolyn Marksberry in her Gallatin County home, then stabbed the woman and her three children, two of whom died.

After his statement was recited, Chapman raised his head and said, “I’m sorry, I’m sorry,” his eyes red with tears. When the warden asked if he was ready to proceed at 7:20 p.m., he spoke his final words: “Yes, sir.”

An anonymous execution team then injected sodium thiopental to anesthetize Chapman, pavulon, which paralyzed his muscles, and potassium chloride, the poison that stopped his heart.

The media witnesses say he remained still, that his breathing became shallow about two minutes into the process, and then his color began to change. The warden reached over and closed Chapman’s eyes a few minutes into the lethal injection. One reporter says the deputy warden — also present in the death chamber — shed a tear as he stared at the floor.

At 7:33 p.m., the warden drew the curtain and pronounced Chapman dead.

After witnessing the execution, Carolyn Marksberry released a statement, saying, “This event brings only one measure of closure — justice may have been served, but any personal satisfaction will likely be fleeting for nothing can truly bring my children back to me except for our memories and the heart-filled bond that only a mother can know.”