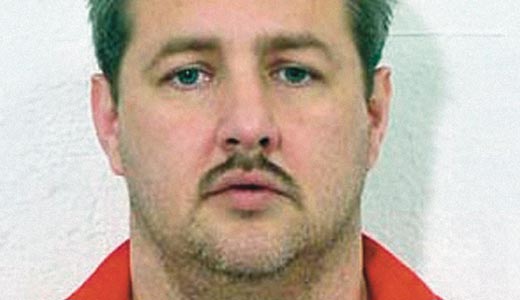 Courtesy of Kentucky Department of Corrections

Time is running out for Marco Allen Chapman, who is scheduled to die by lethal injection Friday at the Kentucky State Penitentiary in Eddyville. If the execution is carried out as expected, the 36-year-old will become the first Kentucky inmate put to death in nearly a decade.

It’s an outcome Chapman has welcomed since his arrest for murdering two children and wounding their sister and mother during a violent rampage in Gallatin County in 2002. After confessing to the crime, the killer fired his public defenders, waived a jury trial and pleaded with the court to impose a death sentence.

The request — unprecedented in Kentucky — was granted, leaving defense lawyers to fight on his behalf, claiming Chapman was incompetent and trying to commit suicide by court. Late last month, however, the Kentucky Supreme Court cleared the way for his execution, barring the lawyers from continuing their quest to save his life.

With Chapman’s court battle effectively stalled, anti-death penalty activists hoped either the governor would grant clemency, or that a statewide injunction temporarily halting executions — the result of an unrelated appeal regarding the state’s lethal injection protocol — might be declared in time.

But at this point, it appears neither scenario is likely.

On Monday, Gov. Steve Beshear declared he would not grant clemency, saying in a statement: “I believe that capital punishment is appropriate in the case of particularly heinous crimes, absent some strong extenuating circumstances. I have reviewed the facts of this case in detail and have given much prayerful thought to it. I do not find any such strong extenuating circumstances in this case … absent any further legal impediments which might arise, the state will proceed with carrying out the sentence.”

In a last-ditch effort to spare Chapman, a group of unnamed citizens filed a motion in Franklin County asking the judge to temporarily suspend executions, claiming the Kentucky Department of Corrections violated state law by not allowing the public to comment on its protocol for carrying out lethal injections.

It’s an issue currently being considered by the state Supreme Court, but the justices most likely will not rule on the appeal — filed by another death row inmate — before Chapman’s scheduled execution.

“State law requires that our clients have a right to public comment. Because that did not happen, we believe the execution protocol is null and void and unenforceable,” says Philip Longmeyer, a Louisville attorney representing the citizens seeking an injunction to save Chapman. “What if this execution goes forward on Friday and then on Monday the Kentucky Supreme Court makes its decision?”

But on Tuesday afternoon, Franklin County Circuit Judge Phillip Shepherd denied the motion, all but sealing Chapman’s fate. Without some unexpected last-minute intervention, at 7 p.m. Friday, guards will escort Chapman into the execution chamber. There, an unidentified team of executioners will pump into Chapman’s veins a three-drug cocktail of sodium thiopental, a barbiturate used to anesthetize, pavulon, a paralyzing agent, and potassium chloride, a chemical used to stop the heart.

“This man wants to commit suicide and the state is helping him do it,” says the Rev. Patrick Delahanty, director of the Kentucky Coalition Against the Death Penalty. “He is assuming the role of God in his life, just as he did when he took the lives of those children, and that’s not right. Obviously he shouldn’t have taken on that role back then in ending those lives, but he shouldn’t be able to do so now by taking his own life either.”

Shortly after 4 a.m. on Friday, Aug. 23, 2002, Carolyn Marksberry awoke to a knock at her front door. Standing on the porch was Marco Chapman, an acquaintance who had previously dated her best friend. Chapman asked if he could use the phone; she said yes.

Once inside, Chapman unzipped a duffel bag containing a knife and duct tape. He pulled out the knife, held it to Marksberry’s throat and demanded all her money. In turn, the woman frantically gave him all her cash and credit cards, hoping he might leave peacefully.

But in fact, a gruesome nightmare was just beginning.

Chapman, high on crack, forced the woman into her bedroom where he bound her to the bed frame with duct tape and a vacuum cord and raped her. After the sexual assault, he repeatedly stabbed her, leaving her barely alive.

Before leaving, Chapman encountered Marksberry’s three children and a violent attack ensued. First, he stabbed 10-year-old Courtney, who fell to the floor and played dead. He then proceeded to slash the throats of 6-year-old Cody and 7-year-old Chelbi, both of whom died.

After fleeing the bloody crime scene, Chapman traveled to a cabin he owned in Kanawha County, W.Va.

By that afternoon, Kentucky State Police already were hunting for Chapman. The state police informed West Virginia law enforcement of their manhunt, and told them to be on the lookout for a blue Dodge pickup truck.

Within a few hours, Chapman was arrested. As he was being handcuffed, he asked the officer to shoot him in the head to be “done and over with it.” It was the first in a string of requests to be killed.

Chapman immediately confessed and was extradited to Kentucky where he ultimately was charged with two counts of capital murder, two counts of attempted murder, rape, burglary and robbery.

Over the next few years, Chapman repeatedly voiced his desire to die, telling the court the only thing that would help him was a bullet or the electric chair. While being transported, the inmate tried to escape, screaming at the deputy, “Shoot me! Shoot me!” Later, he told a psychiatrist he wanted to “commit suicide by court.”

In early 2004, Chapman’s public defenders at the time argued their client was incompetent.

In court papers, the defense detailed a horrific upbringing: When Chapman was a baby, his parents gave him alcohol in his bottle. His mother beat him, once hitting him in the head with an iron skillet. His father molested him, as did a babysitter. At 8 years old he began drinking and smoking marijuana, and as he got older his drug use expanded to include heroin, crack, methamphetamine, PCP and embalming fluid. He became sexually active at an early age, and experienced gender identity issues. At the age of 14, he attempted suicide by hanging, and then by cutting his wrists.

Despite Chapman’s disturbing past, a court-appointed expert found him competent, which by the court’s standards simply meant he understood the charges he faced. In the fall of 2004, he filed a handwritten letter with the court asking the judge to discharge his attorneys, allow him to plead guilty and be sentenced to death.

The judge granted the unusual request. Although capital defendants in Kentucky have waived their appeals after a conviction, Chapman was the first to waive a trial outright and ask for execution.

In a brief filed with the Kentucky Supreme Court last month, public defenders still fighting on Chapman’s behalf wrote: “The issues presented by this case involve the friction between an individual’s right to control his destiny and the state’s interest in ensuring the integrity and reliability of the process and verdict, as well as society’s duty to see that executions do not become a vehicle by which a person could commit suicide.”

The defense lawyers paint a picture of a disturbed individual with a long history of depression, post-traumatic stress disorder, drug abuse and suicidal tendencies.

In response, the state attorney general’s office recounted Chapman’s crime in graphic detail before arguing, “The fact of the matter is that preferring death over life imprisonment in not ‘state assisted suicide’ just because death penalty abolitionists like to call it that.”