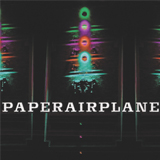 It seems like an obvious statement at first, but music is all about precision. On Paper Airplane’s new EP, when the playing is precise, songs really soar (pun intended). When the members stumble, the music loses its cohesion and we’re grounded. Partially this is because of the intricate, difficult song structure. Paper Airplane’s sound is best described as post-emo.

It doesn’t have the self-flagellation of emo but builds on the song structure using driving guitars and altering time signatures as an homage rather than a derivative. “The Window” sounds like an offshoot of Braid’s phenomenal Frame And Canvas.

When this record is precise, like on “The Window,” we get a glimpse into a new style of songwriting, but at other moments, when Paper Airplane is unconsciously sloppy, the tunes falter. As a debut, Paper Airplane’s EP shows glimpses of how far this outfit can go, though the recording doesn’t always get there.