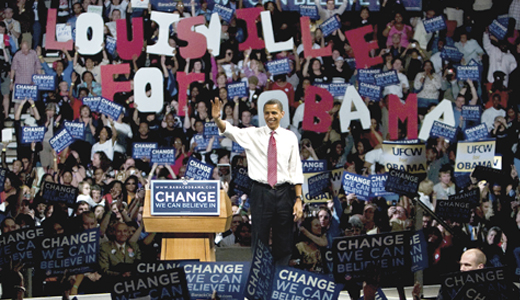 The vast ballroom inside the downtown Marriott was buzzing with chatter, clinking glasses and televisions blaring coverage of Election 2008. Boisterous Democrats were packed into the dimly lit room, anticipating an announcement they had waited months, years — and for some, an entire lifetime — to hear.

Finally, just before 11 p.m., NBC News called it: Barack Obama would become the 44th president of the United States and the country’s first black commander in chief.

The crowd hooted, hollered and hugged. Some stood still, shedding tears of joy, while others danced to the Stevie Wonder song “Signed, Sealed, Delivered” — a late-campaign Obama theme song — blasting over the speakers. (Jefferson County had gone solidly for Obama; not so for our red state, which gave John McCain a 57-41 victory.)

Although the monumental victory was no surprise to the majority of pundits and pollsters who predicted an Obama win leading up to Election Day, that expectation did not detract from the celebration.

In the hours before the big win last Tuesday, partygoers milled about the swank hotel, throwing down cash on cocktails, schmoozing with fellow Democrats and noshing on free chips, dip, crackers and cheese cubes.

Early in the evening, the soiree got off to a good start with Democratic U.S. Rep. John Yarmuth defeating Republican Anne Northup by 19 percentage points.

“That’s one down, two to go,” said Bill Johnson, referring to the yet-to-be called races of Democratic Senatorial candidate Bruce Lunsford and Obama.

And although Lunsford ultimately lost the race to longtime Republican Sen. Mitch McConnell of Kentucky, the defeat did not dampen the flock’s spirits for long.

Upon learning the outcome of the presidential election a few hours later, Johnson said, “We’ve never had a victory like this before.” The 81-year-old African-American was elated to see a black man elected to the presidency, but more importantly he said he was eager for the era of President Bush to end: “Enough is enough.”

The music and dancing and chanting continued uninterrupted until McCain took the podium on national television to concede. At that point, the lively group tuned in to hear what the defeated Republican presidential hopeful had to say.

Gathered around a big-screen television mounted on the wall, the crowd clapped and cheered when McCain credited his opponent with “inspiring the hopes of so many millions of Americans who had once wrongly believed that they had little at stake or little influence in the election of an American president.” The only boos came when McCain thanked running mate Sarah Palin, prompting the revelers to pick up where they had left off a few minutes earlier.

The celebration continued into the early morning hours, with some partygoers lingering at the Marriott well after Obama gave his victory speech from Grant Park in Chicago.

But for Beverly Jones, 61, hearing the TV news networks declare Obama the winner was her cue to head home.

Wearing a bright yellow shirt with “Obama” emblazoned in rhinestones across the front, an equally flashy rhinestone “Obama” pin and a circular button with the candidate’s picture, Jones strolled through the hotel lobby at about 11:30 p.m., smiling widely.

“This is something I never even fathomed,” said Jones, of the Park Duvalle neighborhood in west Louisville. “You wanted it, but you were afraid to believe. But it’s happened and I’m just overjoyed.”

Election Day was an emotional roller coaster for Jones, beginning that morning at the polls, where she cried after seeing voters lined up around the block to cast their ballot in this historic election. By the time she arrived at her job at Brown-Forman, tears had washed away all her makeup.

“Before this, I could have never told my grandson with conviction that he could be president. Now I can say that,” said Jones, who is black, adding, “Obama was born for a time such as this.”

As she turned to exit the lobby, Jones answered her cell phone and joyfully declared: “I told you he was born for it! I told you!"

Is Kentucky on the wright side of hope?

Has Obama taken us beyond race?