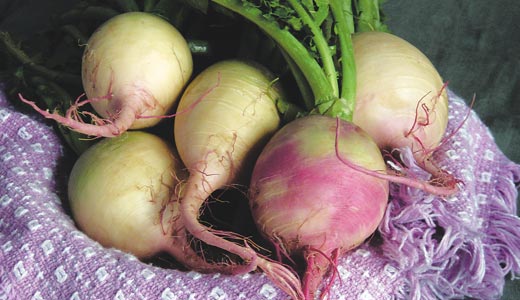 As a passionate enthusiast of almost all things vegetable, I had always been perplexed by my reluctance for one of the more common and abundant root vegetables in our region, the radish. There are so many appealing things about radishes, most obviously their appearance and names (who can resist a fuchsia-colored creation called “French Breakfast”?). Yet, even their beauty, hardiness and central role in Peter Rabbit tales failed to capture my attention, and they weren’t something I sought out at the market. However, all that changed when I discovered what has become one of my favorite autumn vegetables: the watermelon radish.

A watermelon radish? Has there ever been a more intriguing vegetal oxymoron? When I thought of radishes, I thought of spring or winter, and the taste they conjured in my mind was far from that of a sweet, juicy watermelon savored in the height of summer. I also always thought of radishes as singular and somewhat boring, nothing like the diverse and complex varieties of watermelons grown locally. So I knew I was about to try something interesting when I was introduced to this little treasure at Nick and Pat’s Finger Pickin’ Farm stand last year.

It’s a radish for all practical purposes, but it offers so much more. I was initially sold on its appearance alone, as its pale and delicate sea-green skin contrasts magnificently with a startling rosy red interior. When sliced, these radishes look just like tiny watermelons with green rinds and luscious crimson centers, so they make a beautiful addition to any plate of raw vegetables. Their good looks are just the beginning.

The watermelon descriptor must also be related to their flavor, because they have a sweetness unlike anything I’ve ever encountered in a radish. Radishes get a bad rap for being bitter or too spicy, but this variety is both mild and sweet, with a wonderful crispness. So, the radish gang lured me in with this exotic sister, but it wasn’t long before I fell for the whole crew — the watermelon radishes were just the beginning.

One of my favorite things about eating locally is the ever-widening lens into the vegetable kingdom provided by our adventurous local growers. Exploring the local radish offerings around town is a great example of this. Beyond the watermelon or standard globe radish, look for the Easter Egg, French Breakfast, icicle, black and daikon varieties. The Easter Eggs come in a dazzling array of pinks and purples; the black radishes have a rough, coal-black exterior that contrasts with a crisp, snowy-white interior; and the daikons look like overgrown white carrots. While all are delicious and engaging in their own way, the daikon is popular in Ayurvedic and macrobiotic cooking and is used as a cleansing vegetable to fortify the liver and enhance digestion. It’s also extremely versatile; try it pickled and you’ll be hooked.

While I often feel like my brain is unnecessarily full of vegetal information, I knew little about the radish family when they marched into my life. I knew nothing about their nutritional benefits, though yet another joy of sustainable eating is that if it’s local and seasonal, you can pretty much guarantee it’s going to be good for you. So I happily jumped on the radish wagon, devoid of nutritional knowledge but full of blind faith in its goodness. The unknown brought far more goodness than I could ever have planned or anticipated, and trusting in the promise of this seasonal root was an excellent case in point. So here’s what your body can look forward to enjoying during radish season.

Nutritionally, both the roots and their greens have a lot to offer. While the roots provide an excellent source of vitamin C, the leaves contain almost six times as much and are also a good source of calcium and vitamins A and B. Most radish varieties also offer good sources of the trace mineral molybdenum, potassium and folic acid, and, like other members of the cruciferous family (cabbage, kale, broccoli, brussels sprouts), they contain numerous cancer-fighting properties. Since they contain a variety of sulfur-based chemicals, they’re also great for helping to maintain a healthy gallbladder and liver and improve digestion. Lastly, they have mild diuretic and laxative properties, and one source I discovered lists it as a “stimulant,” though I can’t vouch for that one from personal experience.

As one of my favorite topics is the life force in food, I can’t resist sharing this bit of radish wisdom from Rudolf Steiner, which was shared with me by a radish-growing friend:

“If one needs to stimulate one’s thinking, then one should use especially the salty stimulant of the radish. If someone is not very active in the head, it is good for him to add some radish to his food, which will activate his thoughts a little. So you see, the strange fact emerges: One can say radishes stimulate thinking. And one does not even need to be very active oneself, the thoughts simply come when one eats radishes — such strong thoughts that they even generate powerful dreams.”

As an optimistic Aquarian, I believe in most anything and everything, but even I had my doubts about this one. However, I have been eating more radishes for the past month, and my dreams have been unusually powerful, so you never know …

Along the lines of exploring the multiple avenues of wellness offered by our local plant kingdom, if you’re interested in natural healing, try your hand at some of these radish-based remedies. As their vitamin C content makes them a great candidate for treating colds, flu, fever, cough and respiratory problems, you can make a tonic by grating one radish and mixing it with local honey to taste, letting it stand for a few hours, and then taking two teaspoons three times a day.

Another radish remedy I found is for digestive problems. Put a handful of radish leaves in boiling water, cover and let it sit for about 20 minutes. Then strain it, add honey to taste and enjoy it as a tea with a mild, earthy flavor. As I’ve found with most plant-based health approaches, not only do these address the symptoms of the problem, they also work to restore balance on other levels, leading to increased wellness and strengthened immunity.

As a recent radish enthusiast, I hope some of these suggestions and recipes might entice those of you who have yet to cultivate a taste for this local mainstay to give it a try. The following are two simple recipes, but the radish also lends itself easily to roasting or as addition to any stir-fry, soup or stew. They can also be boiled and mashed, and, when done with the watermelon variety, provide a dazzling crimson creation sure to delight.

Seaweed and Bragg’s (or salt) to taste

In a large saucepan over medium heat, bring broth to a boil. Stir in remaining ingredients, turn off heat, cover and let stand 10 minutes before serving.

The lemon juice and tart apples accentuate the crispness of the radishes in this dish. For a sweeter treat, try tossing in some raisins or freshly toasted nuts.

Toss the radishes, apples, parsley, lemon juice and oil in a large bowl, season with salt and pepper to taste, and cover and refrigerate for one hour.