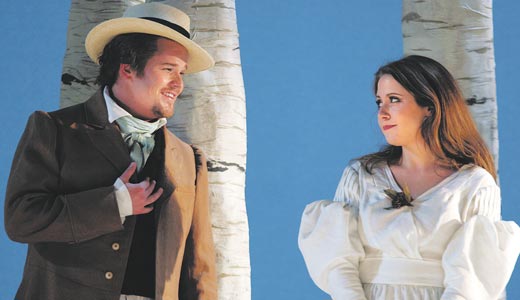 If you’re looking for the Jules Massenet opera “Werther” on the big map of music, it’s pretty near Obscure, just east of Unknown. While Massenet’s “Manon” is still regularly performed, more than a century after its debut, the composer’s “Werther” (pronounced Vair-tair) is almost nowhere to be heard — at least on this side of the Atlantic. It’s never been sung in Louisville, and hasn’t played New York in 22 years.

But if things go the way director Kristine McIntyre expects this weekend, Kentucky Opera audiences might find themselves wondering why? As in: Why haven’t we heard this opera before?

“It’s not like we reached into some dusty old library and pulled something off the shelf that might or might not succeed,” says McIntyre. “This is real music and a real story.”

It fits naturally into the role Kentucky Opera has assumed as an “incubator” of opera in the region. Two years ago, Kentucky Opera produced the seldom-heard “The Pearl Fishers,” launching what has become a popular revival of the Bizet opera. The “find” for next year, promises Executive Director David Roth, will be “Of Mice and Men.” That opera, based on the John Steinbeck novel, has its origins in literature — as does “Werther.”

The “Werther” story springs from the Goethe novel “The Sorrows of Young Werther,” a worldwide best-seller published in 1774. The book tells the tale of a troubled young poet who finds himself the odd man out in a two-guys, one-girl love triangle — and ends up taking his own life. The book’s romanticized view of suicide was blamed for a wave of suicides by young men, and the notion was still around a century later when Massenet composed “Werther” in 1789. But, unlike the book, the opera never caught on.

Certainly, suicide has always been a part of opera, but usually it’s some mythical king falling on his own sword after a spate of bloody palace murders. This Werther thing, however, was more about modern men and women, and maybe a little too close to real life.

McIntyre says she studied Goethe’s “Werther” as a literature major in college.

“One of the things we honestly don’t know is whether the book actually did cause young men to commit suicide, or if it’s simply one of those urban legends,” she says. “In literature, we talk about it as the Werther Effect. But it’s a little hard to know how profound that was. Certainly, the disaffected youth of that generation responded to it. But I think it’s the same thing (in other times) with rock music or cult films. It tapped into a generation’s sense of not belonging.”

While the Werther Effect might belong to another age, psychological drama is very much a part of modern stage.

“The thing Massenet is clearly trying to do is make it like a play,” says McIntyre. “It’s not some grandiose story. It’s about people like us. He sets up situations that almost feel like we’re eavesdropping. Like we’re kind of spying on them.”

McIntyre says Massenet paints the story in a “lush soundscape” of the Romantic Age. “It feels like a play, and then has these gorgeous, long French lines, and this kind of soaring music that is very rich in sound and orchestration.”

The lead roles of Werther and Charlotte will be sung by the promising young husband and wife team of Garrett Sorenson and Elizabeth Batton, who live in Louisville. Troy Cook sings the Mr. Lucky role of Albert, who gets the girl.