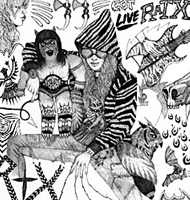 A quick recap: Chinese Democracy leaked (and sucked) while Axl bartered a deal with Dr. Pepper. The Darkness wasn’t ironic (?), and Bret Michaels has turned giving strippers tattoos into a reality television show. Hard Rock isn’t what it used to be in this country.
Enter RTX and their new album JJ Got Live RaTX, which isn’t a live album. RTX is the brainchild of Jennifer Herrema, who made her name with Royal Trux. Saying that Herrema has a big personality is like saying cannibals eat meat. When RTX played the Pour Haus this summer, Herrema wore boots up to her neck and an elaborate fur coat with the heads still attached. Style is an intricate part of RTX’s sound.
JJ Got Live RaTX features your favorite parts of hard rock albums: squealing, noodling guitars; hi-hat; insane breakdowns and some choice synth. But it’s Herrema’s persona that drives the record. Each song is built around a brash non sequitur, like “Are You a Boy or Are You a Girl?” or “You Should Shut Up,” and driven by her equally brash, guttural vocals. In a genre that has seen its authenticity bribed away, RTX is the antithesis. Not style for style’s sake, but wearing the sound as wardrobe. Tight fitting? Sure. But all the better to rock in, my dear.