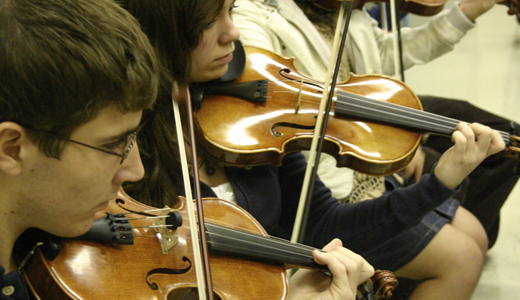 Conductor Jason Seber is hopscotching the Louisville Youth Orchestra through a Bach toccata, working on this spot and that, applying the finishing touches in the last rehearsal before the group’s first concert of the season, Sunday at the Brown Theater.

Seber asks each of the string sections to listen and follow each other’s leads as the melody begins in each section and is handed to the next — literally, across the stage in front of him — from first violins to second violins to violas to cellos and basses. In another spot, he challenges the second violins to “beat” the first violins on a difficult repeated passage. Then he tells the first flute player and the first oboe player, “You two need to be friends.”

That’s said with mock seriousness, of course, because the lead flute and oboe players don’t seem to be bickering. What Seber is talking about is the need for the players to “get along” through the repeated handoffs and interplays of the “Dorian Toccata” — which Seber himself orchestrated from a Johann Sebastian Bach organ piece written some 300 years ago. Seber wants his orchestra to play as Bach might have played his organ, left hand working with right hand across the keyboards and stops and feet on the pedals.

But you know what hard-boiled detectives think about coincidence — they don’t believe in it. Twenty minutes later, the Youth Orchestra is on to an entirely different piece, and the thing will only go down right if the first flutist and first oboist can get along.

This is a movement from Mendelssohn’s Fifth Symphony (The Reformation) that is best known for the Luther hymn embedded within: “A Mighty Fortress is Our God.” Though the work eventually builds to a mighty fortress of all the strings, woodwinds and brass, that is not how it begins. It begins pianissimo. Very quietly. One player. Then another.

And, coincidently, those two opening players, seated right next to each other in the heart of the woodwind section, are first flute, Angela Woods, and first oboe, Teil Buck. The movement begins with the notes they play.

“It’s like a choral,” says Buck. “The flute, then the oboe, then the clarinet — and then all the woodwinds and tympani. It’s a challenge to see how gorgeous you can make it. And how in-tune.”

Woods has the opening notes. “I am thinking of … beauty,” she says, “singing, resonating. Then I want to concentrate on the intonation, for us to be right together in tune.”
The oboe follows the flute. “I just listen to her, and I try to think about my pitch before I come in,” says Buck. “That way, I can visualize where the note is going to be, where it should be, so it can be as exactly in-tune as possible.”

Which isn’t easy on an oboe, with its tricky double reed. Buck will have one reed in her horn, with another soaking in water beneath her chair, ready to sub when needed. Plus the three more reeds in reserve.

“It’s very difficult, because of the reed situation,” explains Buck. “Reeds last only about five hours, on average. And in that five hours, you have to break it in — and then it dies.”

Sunday’s concert marks the beginning of the 50th anniversary season of the Louisville Youth Orchestra, which has now grown to three symphonies that range from beginning talents to advanced. The players represent dozens of schools throughout the area. Woods, for example, is a junior at Carroll County High.

From the start, the Youth Orchestra was intended to be more than an “all-star” orchestra. The Big Idea of the founders — private teachers at the old Louisville Academy of Music — was to create a symphony capable of playing all the major symphonic works — from Bach to Beethoven to Bernstein — that no single high school orchestra or band could ever get to. In the early days, under the baton of Rubin Sher, the Youth Orchestra would, in fact, practice some works it would never play in concert, just to learn them. Seber does it a bit differently, but embraces the “repertory” concept.

“The players get the experience of how a professional orchestra operates,” says Seber. “But instead of three or four days of rehearsal, we have the benefit of a little more time between concerts, and a longer learning process — which is good for kids. They need that time to absorb it all, have it soak in.”

Part of the experience is playing in full symphony.

A special feature of Sunday’s concert is the appearance of young violinist Caroline Goulding, who will perform Mendelssohn’s Concerto for violin and piano with Christopher O’Riley, host of the popular National Public Radio show “From the Top.” Goulding is a 16-year-old student at the Cleveland Institute of Music, who plays a 391-year-old Amati violin. She is also participating in school workshops here this week as a part of the Gheens Great Expectations Series.