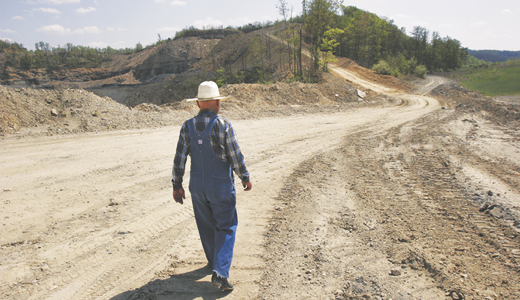 If you can suffer his apparent penchant for mixed metaphors, New York Times foreign affairs columnist Thomas Friedman has an intriguing idea about how to rebuild America in the smoldering post-Neocon glow, thusly simplified: Cleaning up the environment will require dramatic shifts in energy policy, which will lead to new jobs and a thriving “green” economy, which will create jobs that put money in people’s pockets again.

This is by no means an exclusive idea; Barack Obama has been saying something similar for two years on the campaign trail. And it appears millions of American voters agree on the basic relevance of interconnectedness, the idea that one thing we do might affect another. This concept has been curiously absent from much of the present administration’s business.

Assuming for the moment Obama would codify this environment/energy/economy paradigm when he takes office in two months, the net effect on Kentucky could be substantial. We are, after all, among the states most in need of economic stimulation, in part because two of our biggest industries are intricately woven into the tapestry of greenhouse gases currently blanketing our planet. Thus, these industries — coal and cars — are not performing optimally in terms of employment or productivity.

Kentucky is the third-largest producer of automobiles in the country, behind Michigan and Ohio. Ford, Toyota and General Motors have plants here, and those plants have sprouted many associated supply companies. According to Gov. Steve Beshear’s office, about 80,000 Kentucky jobs are tied to the auto industry.

1. Gas prices have been high, which has caused many to reconsider buying fuel-sucking monster trucks and SUVs, which is the gamble Ford and GM currently appear to be losing; and

2. Speaking of gambling, Wall Street blew our money, and credit markets have collectively sucked in the ol’ gut, meaning loans are suddenly hard to come by.

In September, Congress and President Bush gave the auto industry — Ford, GM and Chrysler — a $25 billion bailout loan to assist the companies in producing more fuel-efficient cars. Obama has already signaled he would give a bigger bailout, and said during the campaign that raising fuel-efficiency standards would be a priority.

U.S. Rep. John Yarmuth of Louisville — an early supporter of Obama who has since been close with the Illinois senator — says any bailout would require automakers to become more progressive in terms of emissions and fuel economy standards.

“I think one of the things that’s clear is that (Obama is) going to do everything he can to not just support the auto industry, but also to kind of steer it in a direction that will contribute to the goal of making us energy independent,” Yarmuth says. Obama has defined such independence, generally and with regard to the auto industry, as eliminating oil imports from Venezuela and the Middle East in 10 years.

Jay Blanton, a spokesman for Beshear, says short-term stimulus for the hurting auto industry is essential so that companies can revamp their plants to produce smaller, more efficient cars.

“Those industries are absolutely vital,” he says. “We’re the largest producer of autos in the South right now.”

Just minutes before Bill Caylor, president of the Kentucky Coal Association, is speaking in a measured way about the future of coal under an Obama administration, he is alarmist. He says Obama would bankrupt the coal industry with a cap-and-trade system of taxing carbon emissions, and that this is Obama’s goal. Then he says Obama has been naïve and political during his campaign, and that “we’ll see a different perspective” once the president-elect becomes more educated on coal issues. Finally, he reminds that because Illinois is a coal state, Obama knows the importance of coal and will come to his senses.

Caylor is a partisan, to be sure, and he has a history of combativeness with anyone who could be considered to have made a derogatory comment about coal or how it is mined in Kentucky. This is his job. About two minutes into a recent phone call, he reminds that coal provides half the electricity in the country, 93 percent in Kentucky.

He speculates that a cap-and-trade system — Obama has proposed an economy-wide system but with no details, and has said that by the end of his term, 10 percent of our electricity should come from renewable resources — would cause electricity rates in Kentucky and across the middle belt of the U.S. to rise dramatically. In turn, he continues, major industries like automakers would leave Kentucky because the electricity is no longer cheap. (Where they would go is unclear, because in Caylor’s narrative, every state’s energy costs would rise in the same way.)

Saying Caylor’s doomsday rhetoric about the dramatic end of coal is unhelpful, Yarmuth argues that a tax on new and existing coal-fired power plants is “generally something we ought to do, but again, the devil’s in the details for sure on that.”

Obama has a mixed record on coal issues. He and Sen. Jim Bunning, R-Ky., co-sponsored a bill in June 2006 that provided incentives and guaranteed loans for research and construction of coal-to-liquid facilities. He turned his back on it the following year, under pressure from environmentalists, voting against another huge incentives package for Big Coal. Neither became law. However, Obama did secure $200 million in the 2007 federal budget for research into carbon sequestration technology, which holds that coal plants should capture and bury harmful CO2 emissions (the main contributor to global warming), a terrifically complex and elusive process that seems more fairytale than reality.

During the primary against Sen. Hillary Clinton, Obama ran an ad in Kentucky positioning the candidate as friendly and sympathetic toward coal; it didn’t appear to help him win any votes, and he has since taken a bolder stance, saying on his website that his administration may ban any new traditional coal-fired power plants. Generally, Obama has said coal needs to be part of a new energy portfolio with a heavier emphasis on renewable energy sources like solar.

Blanton, from the governor’s office, says Beshear is expected next week to release a comprehensive state energy plan that will include coal as a “big part of the foundation.” Beshear supports more funding for research into carbon sequestration and coal-to-liquid fuels. This week, Kentucky joined The Climate Registry, a nonprofit group that seeks to establish and monitor a national emissions system. Blanton says the new energy plan includes “some real goals for the first time in this state’s history of how to substantively lower emissions.”

There is no question that is a key issue. According to the Union of Concerned Scientists, an average coal-fired power plant in a year produces 3.7 million tons of CO2, equivalent to chopping down 161 million trees. (According to the government’s Energy Information Administration, there were 616 such plants in the U.S. in 2006.) As well, it releases 10,000 tons of sulfur dioxide, which causes acid rain and produces small particles that lodge in your lungs, and 10,200 tons of nitrogen oxide, as much NOx as 500,000 cars. NOx is also a key ingredient in smog.

So here we are, America (despite Kentucky’s best efforts), on the precipice of a new era that has already been defined as a “change” from a situation so horrendous, only 16 percent of the people polled by CNN/Opinion Research Corporation, as of Monday, still think we’re mostly OK.

Regardless, the facts are difficult. According to Workforce Kentucky, the state’s unemployment rate was 6.7 percent in September. It was 6.1 percent the month before.

The Department of Labor reported recently that the national unemployment rate is 6.5 percent for October, a 14-year high.

John Thelin, a professor at the University of Kentucky with an emphasis on higher education and public policy, says it’s unlikely a new administration will help pull Kentucky out of the lowest ranks in income, economy and education — all things that the Friedman/Obama model should, in theory, address.

“The problems that faced Kentucky in various parts of the state and the whole state in 1960 are very similar to those that face Kentucky in 2008,” he says.