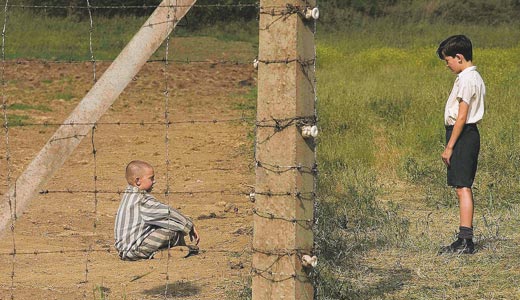 The film begins with a quote by English poet John Betjeman that perfectly sets the tone of the story: “Childhood is measured out by sounds and smells and sights, before the dark hour of reason grows.”

“The Boy in the Striped Pajamas” is a fictional, tragic story filled with many what-ifs and what-could-have-beens set during the Holocaust. Like the handful of missed opportunities in “Romeo & Juliet” that could have prevented the outcome, “Striped Pajamas” has the same near-misses riddled with irony that could have stopped the heartbreaking final scene. Through the eyes of 8-year-old Bruno (Asa Butterfield), an SS officer’s wide-eyed, adventurous yet sheltered son, we see the war as nothing more than Dad’s job — the good guys vs. the bad guys.

Naturally, Bruno is apprehensive of the family’s move from their cush digs of Berlin to the sparse German countryside, where his father has been relocated to watch over a concentration camp, which Bruno only knows as “The Farm” where strange people wear striped pajamas all day long. His mother forbids him from leaving the family lot, but like any bored 8-year-old seeking adventure, he finds his way to the barbed-wire fence where he spots Shmuel (Jack Scanlon), a sickly boy sitting among the rocks and dirt, on the other side. Bruno is immediately curious about his newfound friend — he asks what he does for fun, where his family is, how to play the “number game” stitched on his shirt and why he is stuck on that side of the fence. Bruno brings Shmuel cookies and sandwiches, and they discuss the world as they know it.

“What is that smell coming from your farm?” Bruno asks.

“I don’t know, they won’t let us over there,” Shmuel responds while devouring a cookie in a single bite.

While “Striped Pajamas” hovers mostly in the innocence of a child, it also exposes the blind innocence of the German residents during World War II.

“It’s hard to believe they smell as bad dead as they do alive,” quips a fellow officer to Bruno’s mother as they gaze at the black smoke pouring out of the stacks. In the span of a 30-second, close-up shot, we watch her horrified facial expression as she realizes what the smoke is — cut to her begging her husband for answers and explanations.

“Striped Pajamas” isn’t easy to sit through, nor is it easy to walk away from. Fictional storylines set amid real-life events can sometimes be hokey and forced (does “Titanic” ring a bell?). This film, however, astutely walks the line of what we know is true and how that truth looks to an 8-year-old living through it.