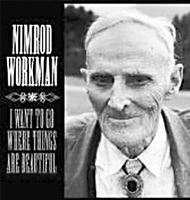 There’s a haunting quality to the late Nimrod Workman’s voice. Without any accompaniment, the voice of the former coal miner and union activist seems disembodied, perhaps lost, singing sad songs about places to which it can never return. I Want To Go Where Things Are Beautiful collects 27 traditional and original songs recorded by Workman in 1982 at the age of 87, but relatively unknown until now. Workman’s songs are a curious blend of the sacred and the secular — he feels equally at home singing about the hand of God as about the girl he wants to take down by the creek. Occasionally, Workman breaks to introduce a song or tell a story. At these moments, the work begins to feel like a conversation. As Workman sings, he opens up his own story. It wouldn’t be right to say that his stretched and withered voice brings a new life to this disparate collection of songs. Rather, it brings a sense of age and longing that’s somehow more satisfying.