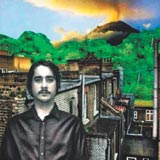 For our purposes, let’s focus on psych folk and its use of hymnal-like choral arrangements, hypnotic, fuzzy guitar passages that build on repetition, ambiance and pensive melodies that move deliberately up and down the scale. Where also the rock ’n’ roll beat of an energetic drummer is forgone for the subtle beat of a tambourine or the occasional filigree drawn from a well-placed cymbal.

At its base is a carefully picked acoustic guitar, rambling and rustic. From there, voices rise from but remain in the distance, their words enveloped by a ghostly haze, making them almost indiscernible. The message, it seems, isn’t as important as the feeling. And the feeling here, especially on the self-titled Hush Arbor debut, is one of reverence. As if to say the world itself is both frightening and amazing. The meditative parts pull ears toward the speakers only to let the restless parts blow those ears away.

It’s a well-intentioned trip, but be careful — it’s still a trip.