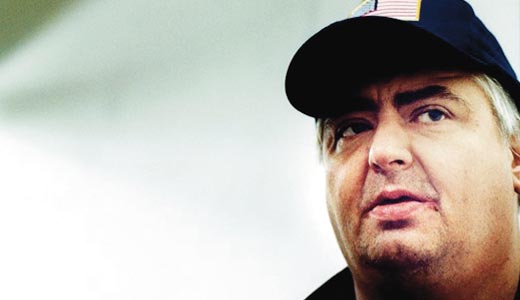 Daniel Johnston is midway through explaining a comic book shopping trip in Vienna when he lays out a polite request.

“Is there anybody that can take me to a comic book store?” Johnston says by phone from Waller, Texas, where he lives with his parents.

Family surrounds Johnston. His brother Dick is his manager. His sister Marjory arranges press interviews, does Johnston’s laundry and takes care of their parents.

“We try not to let Daniel handle his own business, because he just gives things to people,” Marjory says.

The family discourages buying Johnston’s art from sources other than these two sites because the vendors “don’t pay Daniel any money.”

This fuss and coordination over Johnston hit overdrive in the 1990s when his homespun tapes of childlike, heartwarming and sometimes disturbing songs made him a celebrity.

His songs and his career are shaped by his longstanding battles with mental illness — he found worldwide fans in David Bowie, Sonic Youth and Pearl Jam.

Nirvana’s Kurt Cobain famously sported a shirt with Johnston’s “Hi How Are You?” message, but it was “The Devil and Daniel Johnston” that wrote his name in the annals of independent rock. Jeff Feuerzig’s 2006 documentary followed Johnston’s suffering from manic depression.

The 2004 two-disc set, Discovered Covered: The Late Great Daniel Johnston, showed a picture of the singer looking at his own grave, and featured TV on the Radio, Clem Snide, Beck, Starlight Mints and many others covering Johnston’s songs.

“It’s mainly … it looks like comic book art, something like that,” he says. “It’s my normal stuff, it’s about the same. I wouldn’t know what to call it. It’s not really psychedelic. It’s amateur. That’s what I’d call it, because I love amateur art. I have gotten better at drawing, but things are out of proportion. I have no other claim but to just say it’s amateur. They do sell though because of my records.”

Of which there are many: Not counting singles and compilations, Johnston has released more than 20 albums, and he has five albums’ worth of material he hasn’t touched.

A new book of his artwork is being published, and Marjory recently met the actor who will play young Daniel in an upcoming biopic.

Johnston’s bringing new artwork to sell at Good Folk Fest. He’s been on a tear. “Just in the last couple days, I’ve been drawing more,” he says. “We’re looking forward to being there.”

While the third annual Good Folk Fest uses the tagline “primitive art, primitive music,” show-goers might find the results anything but.

More than 80 visual artists will be featured, and the music lineup melds folk and punk’s practitioners celebrating lo-fi and the ukulele: The festival’s website boasts that the “Uke is King in 2008.”