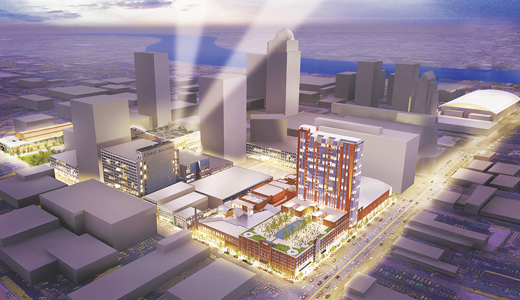 Courtesy of the Cordish Cos.

For weeks, Metro Council Democrats had joined their Republican colleagues in voicing a chorus of concern about a proposed deal to shell out $12 million to buy three acres of downtown land, then lease the prime real estate to a developer for a buck a year. This trepidation on the part of the council — particularly Democrats — did not go over well with Mayor Jerry Abramson’s administration, which negotiated the 138-page agreement for the Center City project.

Facing pressure from the mayor’s office to close the deal before the Dec. 1 deadline, many Democrats clearly were struggling with the decision last Thursday as they discussed the possible outcome of a vote on the matter.

Though they criticized the negotiated deal publicly, in the end, thanks to a little arm-twisting from the mayor’s office and cheerleading from business leaders, council Democrats buried their anxiety with a vote along party lines to seal the sweetheart deal, culminating three hours of impassioned debate. The 15-11 tally ensures the city will proceed with the purchase and then lease it to the developer at the bargain price of $1 annually for 99 years, with two 25-year extensions available.

During a majority caucus meeting just hours before last week’s vote, Council President Jim King, D-10, broke the news to his colleagues that there was nothing new on the table to consider, and that the developer had failed to respond to earlier recommendations.

“I’m told this is as good as the deal is going to get,” said King, who, on behalf of the council, negotiated with the mayor’s office and the Cordish Cos., the Baltimore-based developer also responsible for Fourth Street Live.

The council voted to table the Center City deal in October, citing a number of concerns, including the fact that Cordish was not willing to guarantee a prevailing wage and had only committed to developing 100,000 square feet of the development bounded by Jefferson, Second and Third streets and Muhammad Ali Boulevard. Center City would be an extension of the Fourth Street Live entertainment district.

The developer eventually agreed to build out 200,000 square feet, but did not consent to a prevailing wage.

“I need to be comfortable with this,” Councilwoman Barbara Shanklin, D-2, said at the caucus meeting. “I’d hate to lose the whole project, but the lack of prevailing wage bothers me.”

In fact, it wasn’t until the caucus meeting, just hours before the vote, that Joe Wise, business manager for the Greater Louisville Building and Construction Trades Council, informed them the developer would only pay prevailing wages to employees working on the Louisville Gardens renovation — also part of the agreement — and public infrastructure, which is limited to work on curbs, sidewalks, courtyards and lighting.

In addition, the deal did not guarantee sufficient jobs for local unions, something Democrats viewed as essential. Without a prevailing wage, Wise added, people from throughout the region would come looking for work, squeezing out local workers because they may work for lower wages.

Some council Democrats suggested tabling the issue for consideration at a future meeting, while others were ready to put an end to the discussion.

Usually more diplomatic, Councilman David Tandy, D-4, who represents much of downtown and who attended the press conference with Louisville business leaders pushing for approval of the deal earlier in the week, said the debate needed to end so the project could move forward.

“The question before us is, ‘Do you want to take a step forward or back?’” he said. “In my book there is no standing still. We got the land, so let’s take the lead on this thing. We are here to make tough decisions.”

Ultimately, the mayor’s office and Cordish told the council to take it or leave it. And apparently, playing hardball worked.

For council Republicans, the final vote was a reminder that a bipartisan coalition in the Metro Council can evaporate in a matter of hours under the right kind of pressure. Without any significant changes, the same council members who several weeks ago had grave reservations reluctantly voted for a multimillion-dollar deal without any revisions.

“The message was definitely take it or leave it. There’s no question,” Councilman Kevin Kramer, R-11, said in a recent interview. After delaying the land purchase in October, the council announced that a working group of eight members from both parties would meet to discuss minimum requirements for the developer and protections for taxpayers. Kramer said the council was trying to hold Cordish to specific requirements not in the original agreement. The bipartisan group drafted and sent a letter of nine recommendations to the mayor’s office in an effort to get Cordish to agree to additional terms, including a specific timeline and minimum dollar investment.

The response from Cordish, he said, was that the council should have thoroughly read the agreement, and that it was too late to negotiate.

But Kramer said the proposal was rushed before members back in October, and there was no opportunity to thoroughly review it.

And last week, he said, it happened all over again.

With a 15-11 Democratic majority that will grow to 16-10 next year, Kramer said he expects more of the same: “This isn’t the first time we’ve seen something this major come in quickly with the expectation that we just say yes without having a chance to look at it. It won’t be the last.”