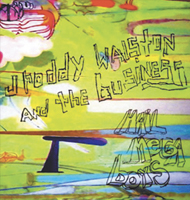 In a time when bands like The Hold Steady and The Parlor Mob are reminding us of what we miss about the golden age of rock, J. Roddy has offered up a wonderfully undemanding sacrifice to the gods of a bygone musical era.
Hail Mega Boys is a no-frills record, not a showcase for finely honed technique, a masterful producer or cleverly employed studio tricks. It’s just a good bar band doing what good bar bands do best. This unadorned approach exudes a raw intimacy in the same way it does when curling up on a rainy day with Iggy & The Stooges or The Boss and his boys.

“Rock and Roll II” is explosive with a barroom refrain that brings “Tenth Avenue Freeze Out” to mind in vintage technicolor. And the vaguely bluegrass-inspired track “Generic in Love” is an absolute treasure as the band mulls over its own distaste for romantic clichés.

This isn’t a band to wrestle with; in fact, bask in this record and enjoy it for no reason beyond its total lack of self-importance.