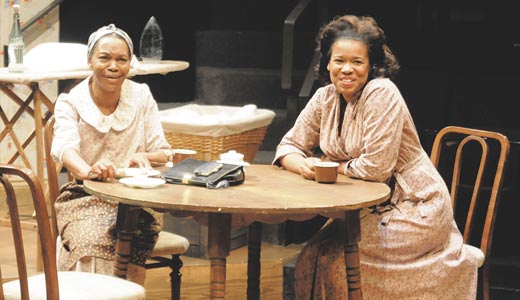 (Actors Theatre of Louisville presents Lorraine Hansberry’s “A Raisin in the Sun.” Directed by Israel Hicks. Continues through Dec. 13 in the Bingham Theatre. For tickets, call 584-1205 or visit www.actorstheatre.org.)

This is the November to consider the historical effect of individual dreams, and 50 years after Lorraine Hansberry’s “A Raisin in the Sun” made her the first black female playwright on Broadway, her exploration of hope and dignity in the lives of a working-class black family is as relevant as ever. Family dramas are by nature intimate affairs — without song and dance numbers or special effects, a production will live or die on the skill of its actors. The Actors Theatre of Louisville cast, under the expert direction of Israel Hicks, rises to the challenge with well-crafted, powerful performances.

Set in the South Side of Chicago in the 1950s, the Younger family lives three generations deep in a crowded two-bedroom apartment in a crumbling tenement. With a hefty insurance settlement check on the way, Walter Lee (Terrence Riggins) finds himself at odds with his mother Lena (Marlene Warfield) over how to spend the money. Walter Lee dreams big, and his plan of opening a liquor store is the key to all his unrealized ambitions. Lena’s dream is more modest and demands hard work — she wants to buy a house for the family, with a yard for little Travis (Pierre LaFran Priest Jr.) and a garden, with a little set aside for her daughter’s education. For Lena, the certainty of a comfortable home is enough, but Walter Lee will risk everything for a chance at wealth and independence.

The Younger women are the hardworking keepers of family dreams, and Warfield plays the frustrated matriarch from the heart and gut, providing the moral compass with both compassion and steely reserve. Thanks to the backbreaking domestic work Lena and her daughter-in-law Ruth (Louisville native Joy DeMichelle Moore) perform in the kitchens of wealthy white women, Walter Lee’s little sister Beneatha (Nicole Gant) is able to attend college, explore black identity and plan for a career in medicine. To Lena and Ruth, her dabbles in self-expression are an absurd luxury, and as they support Beneatha’s education and career plans, they take pains to remind her of her privilege.

Gant’s blithe optimism is bolstered by her palpable sense of responsibility, and Beneatha’s attraction to Nigerian intellectual Joseph Asagai (Gilbert Owuor) betrays dreams even bigger than her brother’s — an Africa free of colonialism and a black America free from assimilation by the dominant white culture. Gant and Moore are a study in opposites, and Gant’s breezy naiveté is balanced by Moore’s knowing weariness. But even with every disappointment worn hard on her face, Moore’s quiet beauty and dignity rival Gant’s youthful glow.

But it’s Riggins who wears Walter Lee’s dreams the hardest, delivering a mesmerizing performance of a man so burdened by a bottomless pit of want that he grows wilder with every minute spent standing in the same spot. With expert control, Riggins allows Walter Lee to spiral to the lowest point and then brings him back, rising from his knees to become the man his family — and the audience — so desperately needs him to be.