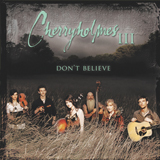 Listening to Cherryholmes’ third album, it becomes instantly apparent that the members of this familial outfit are top-shelf bluegrass musicians — the group’s instrumental interplay is often dazzling, and the performances are never less than tasteful and refined. Thus, it’s frustrating to hear the group expending so much energy on pedestrian material ill-suited to their strengths. Don’t let the bluegrass motif fool you — add pedal steel and most of these songs would sound right at home on pop-country radio. When the group lets their chops take center stage, as on the instrumental “Sumatra,” things heat up considerably.

The fact that “Sumatra” is the album’s obvious highlight is no coincidence — Don’t Believe’s lyrics are often downright embarrassing, with clichéd imagery (oceans of tears, bleeding broken hearts) and cringe-inducing rhymes (eyes/lies, my heart/torn apart) permeating nearly every song. That said, Cherryholmes do acquit themselves nicely on the sophisticated vocal tracks “Don’t Believe” and “The Sailing Man.” Would that the rest of Don’t Believe were so inspired, or made such use of the chops that come so effortlessly when the group lets them.