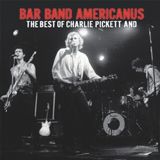 Nothing gives permission to just get drunk and reckless like a great bar-band. There’s something about the communion of roots, rock and a singer with a hillbilly’s fun-loving, straight-talking sensibility that leads to sweating, head-bobbing and consuming copious amounts of barley’d beverages, all in the name of having a good time.

Florida’s Charlie Pickett, who, in the ’80s, used to play with a group of sidemen who called themselves the Eggs and later MC3, is exactly that great American bar band that you don’t want to hear if you’re trying to stay sober. The lure of their debauchery is irresistible. “Liked It a Lot,” for example, after some flat-out self-pity, asks, Why did you fuck him? Why did you suck him off? But that’s not the point of the song, which happens to be: Baby, I hope you liked it a lot.

Pickett’s words may, at times, cut like a dagger, but it’s always with a wink because, most often, the music — a raw blend of old-time rock ’n’ roll with aggressive guitar lines, swinging rhythms and punk outbursts — sounds like it would rather shake off the blues than live them.