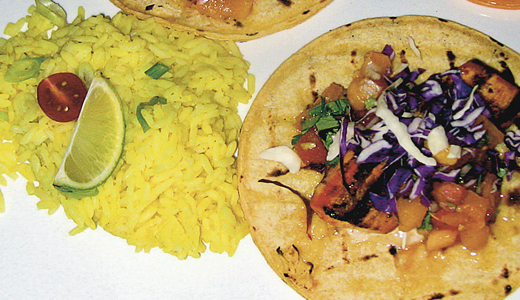 What does fine dining have to do with politics? Consider this: The post-election map of the metro’s voting precincts painted a telling picture of Jefferson County demographics in stark red and blue, and we’re not talking Cardinals and Wildcats. Inside the Watterson, the city’s liberal enclaves and African-American neighborhoods were solid Obama blue. The suburbs, in contrast, bled McCain red.

As a statistical generalization, the city and its suburbs are different, and that difference extends to dining preferences. There’s a reason why the ’burbs are awash with chain dining while most of the independent local eateries that make Louisville weird are located in the People’s Republics of the Highlands, Clifton and Crescent Hill, plus enclaves in and around downtown and St. Matthews.

So, while I was really sorry to learn that Chef Anthony Lamas was closing Seviche A Latin Bistro, his suburban operation on Goose Creek Road, after just under a year in business, I was not surprised.

Lamas attributed the decision to poor economic conditions, exacerbated by losses following Hurricane Ike and a kitchen fire last month. “I have done everything I could and have put all my passion in this restaurant, but it is not enough,” he told the LouisvilleHotBytes forum.

I hated to see it go. Seviche is one of my favorite local restaurants, and Lamas ranks among the city’s most talented chefs.

But I can’t say I didn’t see it coming, and I expect Lamas did, too. Located in a former fast-food eatery in a neighborhood best known for its Kmart, Seviche’s Goose Creek spot never found its niche.

“Men out here want steak and potatoes, so we put more steak on the menu,” Lamas told me last year. “But dishes with Latino names, that kind of scares them. It is a little more red meat, and it is demographics, absolutely.”

While lunching there once, I couldn’t help noticing all the ladies around me were munching on guacamole and quesadillas and talking about what a marvelous new Mexican place this was. That put the handwriting on the wall: If pricey Nuevo Latino is perceived as just another Mexican joint, even a really good one, it’s not going to last.

Happily, however, the original Seviche A Latin Restaurant in the Highlands is going strong. What’s more, the thrifty Lamas salvaged some of the tzotchkes from Goose Creek, notably the wacky octopus-shaped lights that now dangle over the Highlands Seviche’s bar.

We started with an appetizer of arepas ($11). In Colombia, this is street food. Seviche’s version is more upscale: A rich cake of white corn meal, green chiles and creamy Manchego cheese was topped with a trio of perfect tiger shrimp in a tangy lemon-garlic sauce.

The soup of the day ($8) was a delight: grilled zucchini and summer squash with long-simmered chicken and jalapeños in a tart citrus-flavored broth.

The Seviche of the Day ($16) was a Peruvian-style goodie, a couple dozen tiny rock shrimp with red onions, bits of chile pepper and tomato dice flanked by fried tortilla halves and a crisp wedge of iceberg lettuce.

Atun de Chefe ($29), the tuna special of the day, featured an inch-thick medallion of fresh, sushi-grade ahi tuna seared on the outside, then cut crosswise into two rounds to expose the sushi-rare interior. They were plated with a savory Latino blend of white beans and tender white rice with a beautiful but dangerously hot orange habañero salsa.

We finished with espresso ($2.50) and a wedge of rum-infused flan ($8), rich custard and sweet caramel on a pool of sweet dulce de leche garnished with fresh fruit.

Dinner came to a luxury-level but not inappropriate $125.18; hospitable but not overly intrusive service earned a $25 tip.