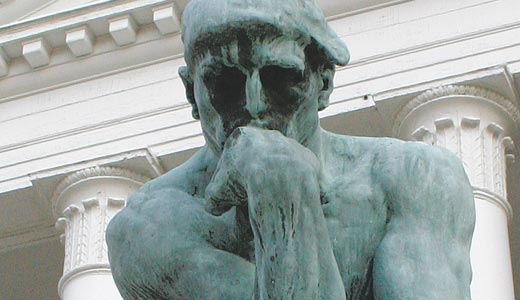 For decades, the University of Louisville has been home to a masterpiece you’re probably familiar with — “The Thinker.” But chances are you are completely unaware of the remarkable history behind this hidden jewel, which the university has long failed to promote, meanwhile letting the iconic statue fall into disrepair.

French sculptor Auguste Rodin created the “The Thinker,” which depicts a man deep in thought. It’s his most famous work, and it turns out U of L is home to the first full-size bronze cast of the piece, with other casts of the statue in such prominent locations as the National Museum of Western Art in Tokyo, the Sydney Opera House and Stanford University in California.

But again, ours is the first, a fascinating morsel of knowledge the university has inexplicably neglected to publicize — until now.

Christopher Fulton, associate professor and head of art history at U of L’s Hite Art Institute, is the latest champion of “The Thinker.” With the help of two colleagues — fine arts emeritus professor Dario Covi and Hite Art Institute galleries director John Begley — he’s campaigning to make it known what a valuable piece of art is located on campus, and to restore it to its former glory.

And the sculpture is in dire need of restoration after sitting outdoors for nearly five decades with little upkeep.

In a push to restore “The Thinker,” Fulton began researching the statue about three years ago. “I’m very interested in sculpture,” he says. “(Rodin) is the greatest sculptor of the modern period. I might also add that ‘The Thinker’ is one of the world’s most recognizable sculptures, along with the ‘Statue of Liberty’ and Michelangelo’s ‘David.’”

After a little digging, Fulton learned that not only was “The Thinker” in Louisville the first cast, but that it was poured under Rodin’s supervision.

Because casting produces a series of multiples, good record keeping was key to uncovering this fact. Luckily, it turns out the sculpture’s history prior to its arrival in Louisville is, for the most part, well documented.

A much smaller version of “The Thinker” was originally part of a sculpture Rodin created called “The Gates of Hell,” based on “The Divine Comedy” by Dante. He later decided to enlarge it to a height of over 6 feet, producing the first large-scale bronze version in 1903.

Henry Walters bought the first cast of “The Thinker” in 1905 for his home in Baltimore, but it was later placed in his self-titled Walters Art Gallery. The gallery put it up for sale in 1948. The estate of Louisvillian Arthur Hopkins bought the sculpture, then donated it to U of L in 1949, where it has sat, all these years, in the courtyard outside the university president’s office — thinking.

Although U of L’s version of “The Thinker” is the first, a cast of the statue housed at the Musée Rodin in Paris is considered the most prominent because of its location in the City of Lights. “The Musée Rodin’s is considered primary in the sense it’s the first version of the sculpture installed in Paris by Rodin,” explains Fulton. And while Louisville’s cast predates the Parisian version by a year or two, it’s received little attention: “The Musée Rodin knew about our piece. Other experts did not know the history.”

So, does it matter that Louisville has the first full-size bronze “The Thinker” ever produced? Well, yes and no.

Yes, because records show that not only is this piece the original of what was to be a series, it was one of only 11 casts (out of about 30) completed before Rodin’s death. No, because in the art world, all casts are considered identical.

For years U of L has kept a file on “The Thinker,” but as the university neglected the statue and left it to weather the elements, interest in promoting its history also waned. A handful of art professors over the years have made an effort to restore and publicize the city’s very own masterpiece, but were met with little interest.

Currently, the bronze icon at U of L is green, the result of chemical changes and corrosion from decades outside without adequate maintenance.

In addition to being subjected to the elements, “The Thinker” also has been the target of vandals more than once. Frat boys painted the sculpture in the 1950s, prompting an outcry from Professor Cori, who criticized the university for not being more concerned. In response, the administration directed the maintenance crew to remove the paint, rather than someone with expertise in art restoration.

There have been minor restorations over the years at the urging of art professors and historians on campus, the most notable in 1972. “The neglect is not from lack of enthusiasm from the art department,” says Fulton. “There is a heightened awareness of the sculpture. The university just hasn’t found the resources (in the past).”

But that seems be to changing.

In 2005, Fulton and his two colleagues — Covi and Begley — joined forces to work on getting “The Thinker” fully restored. They brought in a leading Rodin authority, Andrew Lins, the Neubauer Family chair of conservation at the Philadelphia Museum of Art. They also sought the expertise of Nashville conservator Shelley Reisman Paine.

The team’s 2007 report estimated the repairs would cost nearly $100,000 for three months of work. But at this point, work is not scheduled to begin, and it’s unclear exactly how that work will be funded.

When asked what is needed to complete the cycle from research to restored sculpture, Fulton replies: “Money. The faculty is not allowed to raise money, but I’ll assist.”

But, the administration seems to be more of a willing partner this time around. Now, helping to carry out the plan is Mitchell Payne, associate vice president for business affairs at U of L. “I’ve got an initial restoration plan,” says Payne. “It’s still in the review process. Once that’s been approved, then the next phase is to develop a financial plan for carrying out the restoration.”

The good news is “The Thinker” is structurally sound. “It’s not tremendously at risk,” Begley says. “It’s fairly stable at this point. We’ve been careful about this and we think we’ll get the money and finish it off.”

“The Thinker” will remain at its outdoor location in front of Grawemeyer Hall, and the renewed statue eventually will be the focal point of an improvement project already under way in the courtyard.

Upon creating his masterpiece, Rodin described it as “a naked man seated upon a rock, his feet drawn under him, his fist against his teeth, he dreams … What makes my ‘Thinker’ think is that he thinks not only with his brain, with his knitted brow, his distended nostrils and compressed lips, but with every muscle of his arms, back and legs, with his clenched fist and gripping toes.”

Before his death, Rodin chose “The Thinker” to be included on his burial plot in Meudon, France, exclaiming forever it is part of what defined him as an artist. U of L’s sculpture also is part of the university’s identity and, as such, should receive the care and attention it deserves.