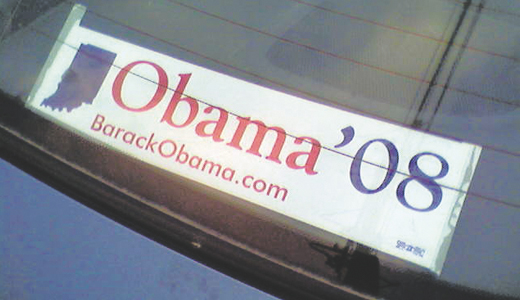 In the weeks and days leading up to the election, predictions of record voter turnout dominated the headlines.

Driven in large part by reports of record voter registration efforts, Democrats in particular began predicting a groundswell of election participation to rival (if not shatter) previous records. Some claimed turnout would exceed 75 percent, a record for American elections.

The record set when 72 percent of eligible American voters cast their ballots in the 1964 election pitting Lyndon Johnson against Barry Goldwater still stands.  Turnout dropped to 62.5 percent in 1968 and has ebbed and flowed in the 50-60 percent range for most of the past 40 years.

Things began to turn around in 2004, when 122 million Americans cast their ballots for a president — an all-time high number of voters, but only 61 percent of those eligible to vote.

While final numbers are still to be determined for 2008, most analysts put the total number of Americans who cast a ballot for president last week at 133-135 million: a 65 percent voter turnout rate (up 4-ish percent over the last election; down 7-ish percent from the record).

Overall voter turnout in Kentucky was at about 65 percent, and John McCain won handily, keeping 16 percentage points and some 296,000 votes between himself and Barack Obama.

Indiana saw the same good (but not really historic) increase as the nation: a 5 percent jump taking us from 55 to 60 percent turnout. However, the fact that the majority of those Indiana voters (a slim majority to be sure) chose a Democrat is a historic event indeed.

Since 1908, the two-party system has dominated the American presidential race with Democratic and Republican candidates garnering an average of 97 percent of the vote. And while the two parties have split the victories nearly 50/50 over the course of the 26 presidential elections during the past century, Democrats have won the presidential race in Indiana only five times, including Obama’s victory.

The first time a Democrat won the Indiana vote for president came in 1912, when Woodrow Wilson garnered a victory with 43 percent of the vote. The win was due less to the Democrat’s popularity, however, than to the fact that Teddy Roosevelt had splintered the Republican Party by starting his own “Progressive Party” a few months before, over a rivalry with William Taft. Together the two Republicans split the majority 48 percent of the vote nearly equally in Indiana.

The country was in the midst of the Great Depression in 1932, and FDR was offering relief from high unemployment with government job creation, as well as tighter regulation of the industries responsible for the financial crisis in the first place. In contrast, Hoover believed the market would straighten itself out and favored little government intervention and minimal governmental programs.

Indiana voters chose FDR again in 1936, when he took 57 percent of the vote.

Three decades would pass before the majority of Indiana voters again chose a Democrat for president. This time race was the key factor of the election. It was the 1964 contest between Lyndon Johnson, who had been serving as president since the assassination of John F. Kennedy, and Barry Goldwater, a conservative five-term senator from Arizona who voted against the Civil Rights Act of 1964, signed into law by LBJ.

In the end, Johnson took nearly 56 percent of the vote in Indiana. Nationally, it was one of the most decisive elections of the century. Johnson won 61.1 percent of the popular vote and 486 electoral votes to Goldwater’s 38.5 percent and 54 electoral votes. Goldwater won only six states — his home state of Arizona and five deep-South states alienated by Democratic civil rights: Louisiana, Mississippi, Alabama, Georgia and South Carolina.

More than 40 years later, Obama became the fourth Democrat to win the majority vote in Indiana over his Republican opponent. And while the Democratic victory is a rarity, the circumstances are familiar.

Like 1912, the Republican Party is splintered and suffering an identity crisis.

Like 1932 and 1936, the country is in the midst of its worst financial crisis in a generation.

It’s only taken one of these circumstances in the past to cause Indiana voters to choose a Democrat as president. In 2008, we had all three. We also had a candidate who believed the majority of Indiana voters could be persuaded to vote for a Democrat — i.e., he campaigned here.

In other words, in 2004, George W. Bush won with 60 percent of the Indiana vote compared to John Kerry’s 40 percent. That 20 percent margin Republicans held over Democrats was completely wiped out by Obama, when Indiana voters gave him 49.92 percent over 48.96 for John McCain.

In the end, Indiana gave Obama a bigger increase in Democratic voters than any other state, and he won by less than 1 percent of the vote, the narrowest victory of the past 100 years. But it was enough to win all 11 of our electoral votes and turn us blue, at least for a little while.