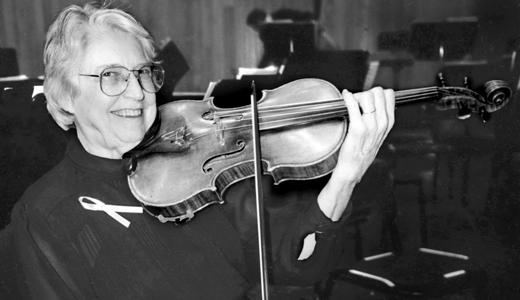 It’s hard to hear viola or violin in Louisville without thinking of Virginia Schneider. Schneider was the principal violist in the Louisville Orchestra for 54 years, and is responsible for bringing the Suzuki method of teaching violin to the University of Louisville School of Music. She died last November at age 92.

For Jack Griffin, who succeeded Schneider in the orchestra, the torch-passing was a defining moment borne out of years of intense practice and dedication that began when he was a freshman in high school.

“She took me for the summer only, because she didn’t know if she would be able to keep me,” he said. “I ended up studying (with her) all through high school and college.”

Schneider’s demeanor left an indelible mark. “She was one of the most caring, loving and compassionate people you would ever meet,” Griffin said. “My lessons never went less than two and a half to three hours. She never charged me a penny, and I’m not the only student she did this for.”

Schneider’s influence on the School of Music widened in the 1960s, when former dean Robert Whitney sent her to Japan to study under Dr. Shinichi Suzuki. Suzuki, a self-taught violin player from Nagoya, Japan, founded a method of learning violin and viola that mimicked how children learn to speak. “Essentially, they start off playing by ear,” Griffin said. Suzuki would teach children as young as 3 or 4, and over time, “they develop incredible listening methods.”

Suzuki’s method revamped music instruction in that parents were included in the lessons and served as “at-home teachers” for their kids, he said.

Schneider went further than teaching, organizing the first Suzuki Institute for Strings in 1964, one of the first such organizations in the country.