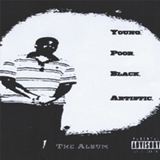 Lee loves hip-hop. It’s apparent in every syllable of his debut album. Unfortunately, like Steinbeck’s Lennie, love for a thing doesn’t necessarily translate to a need to do that very thing. I’m a firm believer in the idea that one of the downfalls of hip-hop is that it seems nearly every fan of hip-hop wants to do hip-hop.

Perhaps it’s because of the relatively easy access to cheap recording software and beat machines. Perhaps it’s the Robin Leach-ness of rap’s promises of champagne and caviar that pushes fans from the bleachers to the stage. The problem is that hip-hop is now in a place where there are more people on stage than in the seats, and that industry cannot sustain itself.

Lee’s debut plays at times like a love letter to a music that is not what he wishes it were, while at other times it falls victim to the same clichés of the artists he sneers at. “When You Came Away” and “4 A.M.” are the winners, introspective story songs, while “Pink Jeans” and “Breakdown” are ill-conceived. Sometimes love from the sidelines can be the strongest one can offer.