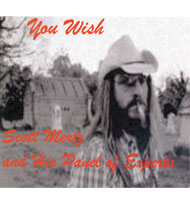 On “Flight of the CrowBear,” the fourth track on Scott Mertz and His Panel of Experts’ LP You Wish, the mandolin, pedal steel and banjo give way to a steady acoustic guitar underscored with a series of radio sounds. It’s reminiscent of Beck’s folkier early albums. The lyrics turn back on themselves as he repeats the refrains over and over, punctuated by electric guitar and then bass drum. You Wish is clearly labored over. Opening tracks “The Portland Punks,” “The Queen of Beckley, W.V.” and “Mitchell Hill Blues” are rootsy affairs, but, like the ambient folk drone of “Flight of the CrowBear,” there’s little punch to Mertz’s album. The influences are clear: one part Waylon Jennings, one part AM-era Wilco. There are moments of beauty in the haunting opening of “Song About a Bracelet” and the handclap-propelled refrain of “W.I.S.A.B.I.” Despite the ambitious start, Mertz and His Experts never quite capitalize on moving their songs into something authentically their own.