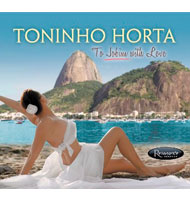 Toninho Horta is a virtuoso electric and nylon-string guitar player; his music could be defined as jazz-influenced, Brazilian music. He’s developed a very personal style, playing beautiful harmonies with rich melodies and nice right-hand grooves. Besides being a strong composer and player, he’s also worked many years as an arranger. Pat Metheny considers him to be “one of the world’s great ‘composers’ on nylon-string guitar (violão in Brazil).”

His latest release is a tribute to one of the world’s greatest composers and artists, Antonio Carlos Jobim, architect of the bossa nova movement, and 2008 is widely considered the 50th anniversary of the genre. (It may not be, says Ruy Castro, Brazil’s leading Bossa historian.) It’s a tall order, and Horta falls short.