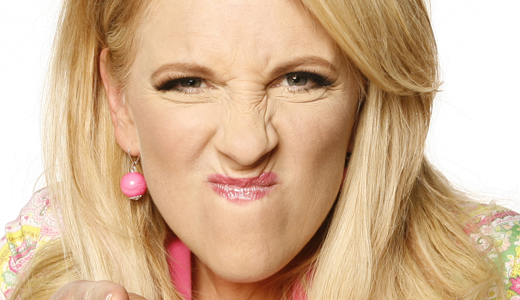 Comedian Lisa Lampanelli can’t hide her anger. A frequent guest on Howard Stern’s Sirius radio show and a regular on Comedy Central (her stand-up specials include “Take it Like a Man” and “Dirty Girl”; you may have seen her on the Flavor Flav roast), the self-touted “Queen of Mean” is stopping in town this weekend as a warm-up for her first HBO special, filming next month in Santa Rosa, Calif. Lampanelli is known for her no-holds-barred tirades against … well, just about everyone … and her dating habits that center around her love for black men, which she appears to use to justify racial jokes. “When I get angry, I get funny,” she says. We found just how angry that is.

LEO: Are you excited about your HBO special next month?

Lisa Lampanelli: It’s really wild … you know, being up there with George Carlin and Chris Rock, except, you know, I’m not dead or black, so even better.

LL: I thought the best Halloween costume this year would be the polygamist outfit with that bad dress and hair bump and braid. But who knows now that Sarah Palin is in the running.

LL: That drunken rehab cunt! I’m so sick of her. I got really mad, because I was nominated for a Grammy this year, and I didn’t win. I show up, I have, like, a $5,000 dress, I had to fly my parents out there, put them up at the Ritz-Carlton. I end up bringing home nothin’ but a yeast infection. That bitch doesn’t even bother showing up and she gets five trophies.

LEO: Do you ever change your routine depending on what city you’re in?

LEO: Any topic off limits?

LL: There’s this arbitrary line and it keeps moving, and nobody knows where it is. For some people, it’s, Can you say “cunt,” can you say “nigger” … it’s just a line everybody has to choose for themselves. I only don’t do it if it’s not funny. No subject is off limits, but if I can’t make if funny, why am I going to bother with it?

LEO: What’s your take on the election?

LL: Don’t care — other than the fact that there’s a black guy running, so I can make black jokes. Thank God he is in the same year as my HBO taping. I think he’s a black guy who’s just white enough to do a good job and show up on time. Because, as you know, black people are always late. I mean, the only time they were on time for something was the Amistad, because we gave them a ride on the boat. I believe he wants change, which I think is what America needs — another black guy asking for change.

I also like how we have Sarah Palin, because she has that retard kid. Bitch, close your legs, it’s time to stop. I’m telling you, the retard kid is the warning shot of the reproductive system — so STOP!

LEO: Tell me about your upcoming autobiography.

LL: It’s hard to write a book. I don’t have no fucking ghost-writer. I’m not some fag who says my little stories into a tape recorder and has somebody make them funny. I gotta do it by myself because I used to be a journalist, so I know how to write. I read somewhere that writers hate writing but love having written. It’s exactly how I feel.

LEO: Would you ever go back to journalism?