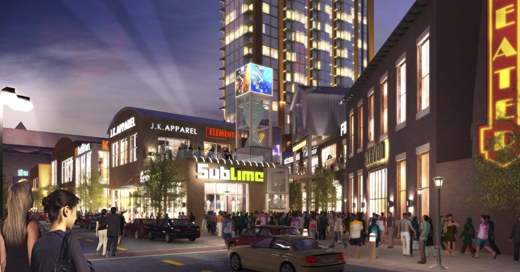 Crammed into the minority caucus room inside City Hall last Thursday, Metro Council Republicans vented frustrations about Mayor Jerry Abramson’s handling of plans to expand Fourth Street Live. A few hours later, the council stalled the proposed sweetheart deal to lease 3 acres of downtown real estate to a developer at the bargain price of a buck a year.

Criticizing the mayor for touting the Center City deal long before it was finalized, Councilman Kelly Downard, R-16, said of Metro: “We’re not good negotiators. We are not.” Others were more direct, saying Abramson wants the deal so badly, “he’s willing to sell his soul to get it.”

The Center City project — which the mayor’s office says is valued between $200 million and $450 million — would bring residential, office and retail development, including bars, restaurants and a cinema, to what is now the site of the old Louisville Water Company, surrounded by Second, Third and Liberty streets and Muhammad Ali Boulevard. The mayor’s office has proposed buying the land for $12 million and then leasing it to the Cordish Co. — developer of Fourth Street Live — for $1 a year for 149 years.

Council Republicans, however, say the deal did not guarantee Cordish would fully develop the site. Some were especially concerned because the deal required the city to contribute $24 million toward the project, in addition to purchasing the land.

Earlier this month, the deal narrowly made it through the council’s budget committee, but Republicans still had concerns, says Councilman Hal Heiner, R-19. “The Mayor told me face-to-face, ‘I will not change the agreement. Heiner, vote yes or no,’” he says.

Republicans have proposed nine new requirements to impose on the developer, including a minimum investment of $200 million from Cordish, plus $20 million to refurbish Louisville Gardens, as well as an agreement to return any unused land to the city after 2015.

And while Republicans vocally opposed the proposed deal, Council President Jim King, D-10, who negotiated on behalf of the council with the mayor’s office and Cordish, has attempted to extract partisanship from the situation.

“I don’t want anyone to pit the Democrats against the Republicans on this,” says King. “We’re on the side of the taxpayer. If there are sides, again, it’s the developer vs. the taxpayer.”

With council members openly questioning the deal last week, the Baltimore-based developer made two last-minute concessions in “good faith” to ease anxiety. Cordish agreed to give at least 75 percent of the construction jobs to Louisville and southern Indiana workers, and to raise the minimum build-out for the project from 100,000 to 200,000 square feet.

In the end, though, the proposed concessions weren’t enough, and the council voted to table the issue. But King assured everyone that the delay would not endanger the deal, saying Cordish is legally bound to the development agreement as long as the council delivers the land. However, the day after the council voted to postpone the purchase, the mayor’s office received a letter from Blake Cordish, the company’s vice president, threatening to walk away entirely.

“We cannot hold these funds and resources for Center City any longer and reluctantly will move them to other opportunities,” he wrote. “Unfortunately, without the support of the council, we have no choice but to turn our focus to other markets that desire our expertise and capital, and understand the dynamics of complex public-private partnerships.”

Cordish wrote that continued negotiations with Louisville “do not make sense after over a year of good faith efforts by all sides has failed to produce an agreement.”

Chris Poynter, a spokesman in the mayor’s office, says Abramson spoke with Cordish after receiving the letter in an attempt to convince the developer to stick with the deal. After two years of painstaking negotiations and with the council adding last-minute stipulations, Poynter says Cordish is seriously frustrated with the city. The arm-twisting is meant to send Louisville a message to get its act together and the mayor’s office is hurrying to oblige.

“We’re hopeful that we can keep them at the table, but to do that we have to get the land purchased,” Poynter says. “The deal isn’t dead, it’s on life support. The ball is in the Metro Council’s court.”

On Monday, the council announced that a work group of eight members — representing both parties — would discuss minimum requirements for the developer of the Center City project and protections for taxpayers.