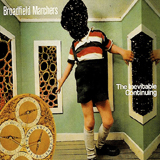 To hear Louisville trio Broadfield Marchers’ (Dustin Zdobylak, Mark Zdobylak, and Justin Carter) latest album is to hear the echoes of other great lo-fi acts Guided by Voices, The Who’s early years and Big Star. The Inevitable Continuing showcases Broadfield Marcher’s pop sensibility. The drums are low in the mix while Zdobylak and Zdobylak (Dustin on guitar, Mark on bass) take control crafting hushed melodies tempered by the lo-fi atmosphere. There are moments of bliss, particularly in the bustling ending of “Circle Avenue Cig Hag” and the delicate Latin-inspired opening of “Stutter Shaker.” Weighing in at a hefty 19 tracks and a scant 42 minutes long, the songwriting is boilerplate and relies on each song reaching some sort of ethereal melody, which the Marchers usually hit. But, at some point, you may ask yourself: “What’s underneath this? Is this just pretty for the sake of being pretty?” Probably. Broadfield Marchers play their CD release show Oct. 18 at Nachbar (969 Charles St., 637-4377).