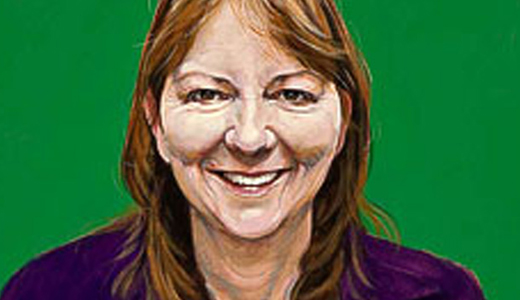 Every important cause needs a champion. One of Kentucky’s anti-mountaintop removal/coal mining “dragon slayers” is Berea activist Teri Blanton. “Some people have called me the Erin Brockovich of the social justice movement within the Appalachian coalfields,” she says on her website. “I believe that we have a future beyond fossil fuels. I believe that people and the land should be treated with respect. I believe that governments should represent all of their citizens to the best of their ability, not just the ones with money and power.”

As a clean-energy proponent, she is a member of the social justice group Kentuckians for the Commonwealth and the vice president of Kentucky Riverkeepers, which is part of Robert F. Kennedy Jr.’s Waterways Alliance.

The Harlan County, Ky., native has inspired many others with her efforts, including artists/activists Robert Shetterly and Cynthia Ryan Kelly. The Louisville Visual Art Association is showing a joint exhibition of paintings by Shetterly and Kelly. Either one of these artists in a solo show makes for a powerful display; put the two in the same building, and it’s impossible to ignore what they have to say.

Blanton’s portrait is one of 44 paintings in Shetterly’s “Americans Who Tell the Truth” exhibit. Twenty-two portraits, with the sitter’s words, are on display through Nov. 20, with the additional 22 shown from Nov. 23-Jan. 4. She’s in good company, among such luminaries as Rosa Parks, Abraham Lincoln and a young Muhammad Ali.

Shetterly started this series after Sept. 11, 2001, as a way to work through his horror, to move toward a feeling of hope for America. He began focusing on people who have put their reputations, livelihood, even their lives, in peril for a cause. The portraits remind us that there are people like Blanton behind society’s changes.

He continues to add more activists to “Americans Who Tell the Truth.” Shetterly’s original goal was to paint 50 portraits. He plans to keep the portraits together as a group and donate them to a museum or library.

Blanton and Kelly run in the same circles and cover some of the same territory. Blanton notes on her website that Kelly is “an artist that was also inspired by the things I do.” She supplies the visuals to Blanton’s audio.

Kelly’s “Stories About Mountain Top Removal” illustrates the horror stories we’ve heard about coal mining and specifically mountaintop removal in Eastern Kentucky. The artist, who resides in Lexington, lived in Eastern Kentucky for months so she would better understand mining, the families involved and their place in the community.

‘Americans Who Tell the Truth’
by Robert Shetterly