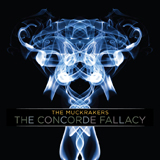 You can stick this quotation on The Muckraker’s onesheet: The Concorde Fallacy is disarming, alluring, infectious. More than 10 years after the band’s formation, Rob Carpenter, Brian Meurer, David Kidd and Micha Gerdis have continued to serve up a delicious mix of pop, guided by Carpenter’s earnest vocals and clever instrumentation. It’s easy on an album review to drop a lot of adjectives to try to describe a band’s sound, but there is something unpretentious about The Concorde Fallacy that isn’t sloppy or uncared for, just blissfully refreshing. As Carpenter sings on “Paris to New York”: I need something more than mirrors and smoke. And they deliver. The theatrics are pared away in favor precise production and delicately crafted songs. However, there’s more to The Concorde Fallacy than slick sounds. “Gene Kelly,” “Seventh Sign” and “Believe” reveal a deeper longing, a depth that moves this group from excellent songsmiths to something, well, beyond the muck. The Muckrakers perform at noon on WFPK’s Live Lunch, and again at 8 p.m. at Fourth Street Live! on Oct. 10. They open for Bonepony on Oct. 11 at Phoenix Hill Tavern (644 Baxter Ave.).