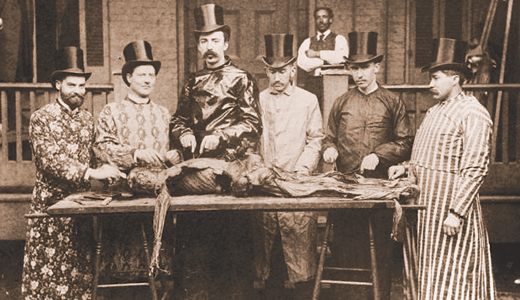 ‘Death, Dissection and Disaster’ in Louisville

According to the 1985 cult horror film “Return of the Living Dead,” Louisville was ground zero for a night of toxic chemical death and reanimated corpses hungry for brains, all culminating in a 5:01 a.m. nuclear strike from the U.S. military to wipe out our bluegrassed zombies. Fun stuff sure, but kids, don’t you ever get tired of Hollywood make-believe? Wouldn’t you rather check out some real Louisville creepiness?

The Filson Historical Society will present a program tonight about true tales of Louisville weirdness, called “Death, Dissection and Disaster: Unsettling Tales from The Filson’s Collection.” Expect to hear true stories of body snatching, séances with the dead and tragedies so shocking a zombie would blush. Filson archivists Robin Wallace, Sarah-Jane Poindexter and Heather Fox will dish out the dirt with historical context they dug up through newspaper accounts, spooky photographs and letters that chronicle the best of Louisville’s spooky past.

The lecture starts at 6 p.m. and includes haunting live accordion music and Halloween treats. Light refreshments will be served at 5:15, and telephone reservations are suggested. —Ben Schneider

Pandora’s ‘Hail to the Chief!’

Regardless of who wins on Nov. 4, American voters are about to make history. In consideration of this momentous election, Pandora Productions, Louisville’s only theater company dedicated to telling the stories of the GLBTQ community, enters the political fray with “First Couple,” a play in two acts by Jefferson Charles Beeker. Blair Tyler is a gay congressman who suddenly finds himself vice president when his predecessor is forced to resign. As he and his partner, a freelance journalist named Jason, begin to adjust to Blair’s new and very public role, the president resigns, forcing Blair to take over the position. While both campaigns in our current election represent milestones for the nation, this play asks an equally relevant question: What would it be like if a gay man or woman were leader of this country? —Joey Yates

Casiotone For the Painfully Alone

There is accounting for taste, as far as Backseat Sandbar is concerned: Halloween night finds Chicago’s Owen Ashworth, better know as Casiotone For The Painfully Alone, joining No Kids and Pomegranates at The Pour Haus for one of 2008’s better indie lineups.

En route to Boston for the first leg of his tour, Ashworth says he’s opened up the setlist to requests from anyone. Some of them he’s willing and able to do, while others are puzzling. “It’s interesting to see which song people want to hear; some things aren’t so surprising,” he says.

Ashworth stays busy, remixing songs for the likes of Dudley Benson and Headlights, while working on his new full-length, due out in March on Tomlab. Much of the set Halloween night will include songs from his last record, Etiquette.

“I think the most essential part of being a zombie is to look pale and have dark eyes. You just need to look dead,” says Alan Grosheider, executive producer of Anubis Digital Studios and the man behind this weekend’s madness of achieving a lofty goal — to break the Guinness Book of Records’ World’s Largest Zombie Gathering. “The last figure I heard was about 1,100.”

Those interested in helping Grosheider with his mission need just to suit up in zombie-wear Saturday and shuffle over to City Block around 3 p.m. There is a $15 cover, but festivities include live music, human pinheads, “Shoot the Zombie” paintball cages, belly dancers, snake dancers, fire breathers and more. Anubis Digital Studios, which released the zombie comedy “Dead Moon Rising” earlier this year, will also be filming scenes on Saturday for the sequel — appropriately named “Dead Moon Rising 2.” A Halloween Ball will kick things off Friday night (7 p.m.) and set the undead mood at City Block. —Sara Havens

El Dia de los Muertos is a Mexican holiday that honors and remembers those who have died. Some of the traditions involve private altars, often using flowers and the favorite foods of the deceased to present as gifts to recognize the departed. The significance of this day is to view death as a new beginning, not an end. The Kentucky Museum of Art and Craft, 21c Museum Hotel and the U of L Fine Arts Department and the Latin American and Latino Studies Program will host several public altars and events from now until Nov. 11.

Starting Friday, 21c will host several altars, one dedicated to artist Frida Kahlo and one to the deceased women of Juarez, Mexico. Take part in viewing the Annual Day of the Dead Altar Contest at U of L’s Ekstrom Library from Oct. 27-31, with an additional day of celebration Nov. 3 in the Red Barn. And to bring it all together, you can attend the KMAC celebration on Saturday, which includes food, live music and dancing, a sugar skull contest, tissue-flower making, a Frida Kahlo costume contest, fire dancers, flamenco dancer Christina Smith, face painting, puppets and more. —Amy Berg

A movie theater, restaurant and bar in the Mellwood Arts & Entertainment Center, the Vanguard Cinema is the coolest idea in town. The catch is, it hasn’t been built yet. Derrick Beasley and his business partners have been working their asses off tp make it happen. The next fundraising event — a screening of David Cronenberg’s “The Brood” and a selection of locally made horror shorts — is scheduled for Saturday night. There’ll be beer, brats and the Derby City Roller Girls at the show in case you need a distraction from all the blood and guts.

It’s being held in the space that will be housing the Vanguard. At this point, it’s just a warehouse, so bring your own chair unless you want to sit your ass on the cold cement. —Alan Abbott

If you’re from Austin and play the blues, comparisons to the late Stevie Ray Vaughan are bound to come up. And so it is with Jonathan Tyler & The Northern Lights. Still in his mid-20s, Tyler’s acumen landed him a contract with Atlantic, a move he hopes will expand his reach and, simply, get more music to more people. “I know that labels are definitely not the force that they used to be, but they’re still very necessary for bands,” says Tyler, with no small amount of ambition. “You can make it a career, but if you want to make records and tour and make it as big as you can and reach the most people you can reach …” As is evident on his album, Hot Trottin’, Tyler doesn’t deal in subtext. “I try to keep things pretty real, and I don’t try to sugarcoat it. I want to make raw, powerful music, just straight-up, it-is-what-it-is type of music.” —Mat Herron

Most group exhibitions show artists doing their own thing. Occasionally, such a show has a cohesive feel, even when the artists did not collaborate while creating.

That’s the case with Melinda Snyder and Cindy Rollins’ exhibit currently at PYRO Gallery. It wasn’t until they hung the art on the walls that they realized they had unspoken symmetry, especially in color choices.

Snyder has been creating textiles for more than 25 years. She’s far from a traditional quilter but is a nonobjective artist in cloth and thread. “During and after art school, I concentrated mostly on machine embroidery using pattern, line and color,” she says. “The tiny and intense stitches were my way of painting and drawing on fabric.”

For Rollins, landscapes are her passion, largely painted from personal experience. The place that fascinates her is where earth and sky meet. “I feel myself getting into that space,” she says. “When I stand at my kitchen window, I see the sunset every night. I’m in awe of that space. Part of (my art) is painting what I see, my reality. The other part is the beauty of the landscape, the terrifying beauty.” —Jo Anne Triplett

Kaviar Forge & Gallery and Heine Brothers’ Coffee are asking, “Does coffee taste better in a handmade mug?” Since the answer is, “damn straight it does,” they organized an exhibition and sale of nearly 500 cups. Most of the mugs are priced in the coffee-friendly range of $15-$35. Coffee-themed paintings and sculpture are also on display to further inspire you to drink up.

The mugs are available for purchase throughout the run of the show. The gallery features all the artists’ work, while the coffee shops have a smaller selection of cups.

An artist reception will be held during the Oct. 31 FAT Friday Trolley Hop from 6-9 p.m. at Kaviar Forge & Gallery. Artists will also be present at the November and December Trolley Hops. —Jo Anne Triplett