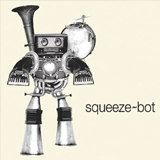 Even if you are as tired as I am of that overworked lineup of accordion, tuba, banjo and drums, you still need to see why Squeeze-bot stands head and shoulders above its competitors. Leader Todd Hildreth (accordion), Brandon Johnson (tuba), Mick Sullivan (banjo) and Jason Tiemann (drums) explode the cliches of the genre. Beginning with a Dirty Dozen Brass Band take on Thelonious Monk’s “Monk’s Dream,” Squeeze-bot covers an incredibly diverse array of artists, from Culture Club (“Do You Really Want to Hurt Me?”) to modern jazz guitarist John Scofield (“So Sue Me”). The delicate waltz of Elliott Smith’s “Between the Bars” evokes images of French cafés, while the band’s take on “Walk This Way” makes one wonder why Aerosmith resorted to guitars. Chick Corea’s “What Was” is serious music rendered with a light touch. The rest of the CD includes two additional Monk tunes and Crowded House’s “Don’t Dream It’s Over.” Squeeze-bot’s Sunday night gigs at Nachbar, together with other performances around town, have clearly enabled these players to develop a sound that’s at once quirky and highly musical. While jazz is the lingua franca, Squeeze-bot’s combination of chops, versatility and humor expands the potential audience for this CD far beyond the tried-and-true jazz community.