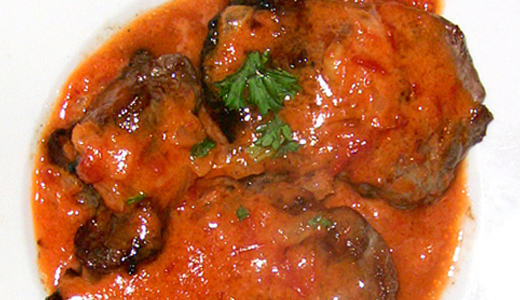 The next time you settle down to a selection of tapas and find yourself feeling grateful for small-plates dining, you might want to pause for a moment of silence in memory of King Alfonso the Wise of Castile.

Legend says that Alfonso, the 13th century monarch known for his smarts and taste for good eats and drink, invented the tapa as a get-well snack to be taken with good Spanish red wine when he was under a nasty illness. When he recovered, it is said, King Alf was so delighted with this healthy diet that he ordered taverns throughout the kingdom to serve it.

Another story traces the tapa to Andalusia, where Sherry bars developed the custom of serving glasses of the strong, sweet local wine with a slice of bread to serve as a cover or lid (“tapa” in Spanish) to keep the fruit flies out of one’s beverage. Soon a cagey entrepreneur dropped a few olives atop the bread; his competitor countered with a slice of Serrano ham, and before long, tapas had evolved.

Maybe so, maybe not. One thing is sure: Tapas are trendy, and Louisville’s dining scene hasn’t lagged far behind larger cities in adopting the concept. After all, what’s not to like about small plates, whether we’re talking Spanish tapas, Greek meze or even Chinese dim sum? You can nosh on a snack or two before moving on to more serious dining, or — as I usually do — make a convivial meal out of a squadron of small plates, reveling in the variety.

As it was in Spain with Alfonso, so it was in Louisville with De la Torre’s: Twenty years ago, Spanish-born Miguel De la Torre and his American-born wife Maggie gifted Louisville with their eponymous eatery, an authentic Castilian Spanish restaurant that has shown exceptional quality from that day to this.

Recently, said Maggie De la Torre, who runs the front of the house while Miguel presides over the kitchen, the restaurant responded to customer demand (with one eye on the sinking economy) and shifted the menu over to an all-tapas list, eliminating larger entrees and bringing the bill of fare into line with La Bodega, their more casual tapas bar next door.

The move makes sense. The new menu offers more than three dozen small plates to choose from — 21 hot and 14 cold tapas, plus a trio of salads and soup, ranging in price from $5.50 (for house salad or soup of the day) to $15 (for authentic Spanish Serrano ham), with the lion’s share falling under $10. (Lovers of De la Torre’s famous paella will be happy to know it’s still available, as a tapa-size portion for $8.)

At those prices, plus an all-Spanish wine list attractively priced with most bottles in the $20 to $30 range ($6.50 to $8 for a glass), a couple can enjoy a light repast of two or three shared tapas with wine by the glass and get out for around $35 plus tip. Or you can do as we did and linger over a leisurely varied meal and a bottle of wine and still get out for well under $100.

Just about everything on the bill of fare was too tempting to ignore, so we practically fell back to throwing mental darts at the menu to see where they landed.

A half-dozen (including a tapa-sized dessert) sounded about right for two, and they came out — as tapas do — as the kitchen fired and finished them, so we sometimes were working on two or three at once. This is not a problem.

We started in the salads and soups section with an outstanding Belgian endive salad ($7.50). Crisp, pleasantly bitter endive leaves had been cut into bite-size squares, tossed with blue cheese (Spanish Cabrales, perhaps) and crisp walnuts, and dressed in a tangy vinaigrette.

From the vegetarian cold tapas menu, we selected a Tortilla Española with salsa brava ($6). Spanish tortilla is not Mexican flatbread, of course, but a hearty, slow-cooked variation on the omelet. Our tapas portion consisted of four neat squares of fluffy egg filled with tender slices of waxy potato and topped with a wake-up-your-taste-buds spicy salsa brava, a rich aioli flavored with hot paprika.

The meat hot tapas section presented a dilemma: We couldn’t choose between two equally alluring lamb dishes. After dithering for a bit, we came up with the obvious solution and ordered them both.

Roasted lamb Castilian style ($9) consisted of a generous portion of simple, thin-sliced and intensely flavorful boneless lamb, cooked until it was falling-apart tender and served in its natural juices in a handsome brown ceramic crock.

Grilled lamb with Madeira sauce ($8.50) may rank among my current top 10 dishes in town. A delicious touch of smoke from the grill-scented three boneless lamb medallions, each dressed with an aromatically spicy pale orange sauce scented with subtle, exotic spices and a sweet hint of Madeira wine. I could eat about eight of these.

On the seafood hot tapas menu, the grilled scallops ($8.50) came highly recommended, and now I know why. Three perfect scallops had been pan-seared until lovely caramelized brown spots appeared on the sides while the interior remained sweet and just cooked through, a frog-hair past sushi style. They were plated on a reddish-orange Romesco sauce, a classic Spanish sauce that traditionally contains roasted tomatoes, ground toasted almonds and hazelnuts and a subtle hint of chile peppers.

I wanted flan for dessert, but they had none. However, chocolate mousse with caramel sauce ($6) more than eased my pain. A small but rich wedge of feather-light, not-too-sweet chocolate mousse was topped with a remarkable caramel sauce, thick as molasses and cooked to a rich, sweet dark brown. The combination of flavors was seductive, and I would have gladly gone back for more.

With a bottle of Onix Priorat, a powerful but nicely balanced red wine made from Garnacha and Cariñena grapes ($27 for a bottle or $6.50 for a glass) and two cups of Jackson’s Organic coffee from arguably the city’s best microroaster, this filling tapas dinner for two came to a reasonable $80.53. Exceptional service, friendly but never intrusive, always competent and perfectly timed, earned a $20 tip.

Café Lou Lou Pastry Chef Marsha Lynch and Sous Chef Mark Johnson whipped up a batch of chili for the eighth annual Phoenix Hill Chili Cookoff recently, and it impressed the judges so much that they gave it the grand prize.

Lynch (who also pens the monthly Industry Standard article within this column) said she can’t reveal everything that’s in it, but gave credit for its bodacious numminess to such goodies as house-made hot sausage from Frank’s Meats, plus dark red kidney beans and black beans, habanero chile powder, chipotles en adobo, roasted corn kernels, masa harina and more. But no spaghetti. Absolutely not. Lynch considers that local custom a perversion.

The chili went on the menu at Café Lou Lou last Thursday and will remain as a special while supplies last.

In one of the worst instances of bad timing in my food-writing career, last week I published a fairly positive review of the NYC-style pizza at Slice of NY in Plainview. Within 24 hours, a sign on the door (and a message on the answering machine) declared the place “closed until further notice for family reasons.” Management couldn’t be reached directly to clarify, but it doesn’t sound promising.