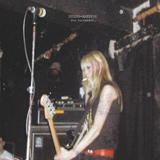 This review has been a real bitch for me to write for one reason: How do you discuss two discs of unabashed retro-shoegaze without comparing the band to My Bloody Valentine? It’s lush, atmospheric, noisy pop-indie-rock. I don’t think I really need to draw you a picture. If I did, it probably wouldn’t be the one that’s on the cover of this thing. Looking at it, I thought I was in for something more akin to Turbonegro. What we have here are two discs, comprising the band’s two earliest EPs from 1999-2003.

These things have never been released outside of the band’s native Norway (who knew those Norwegians were up to other shit besides black metal?). There’s also a host of remixes, which tend to push the snooze factor way up. Why would I want to listen to remixes of the same six songs I just listened to? Seems redundant. Taken without the bonus tracks, this double-disc-er would make a solid soundtrack to a bowl or three.