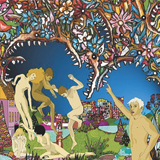 “Nonpareil of Favor” channels the vibe of the album. Starting with a cheerful harpsichord melody over a frantic drumbeat, the track veers off into an experimental rock jam halfway through, which plays out for the remaining two minutes of the song.

Dance-heavy tracks like “Wicked Wisdom” and “Id Engager” are founded in disco, but bear a unique modern twist. The more experimental tracks on Skeletal Lamping blend well with the rest of the album, especially “Touched Something’s Hollow,” a one-minute Beatles-inspired piano ballad sandwiched right in between the two most poppy tracks on the album.

The wrong turns are the bland “Death Is A Parallel Move” and the scatterbrained “Beware Our Nubile Miscreants,” both of which could’ve been shaved off for a more conceptually sound album. Skeletal Lamping isn’t as groundbreaking as Sunlandic Twins or Hissing Fauna …, but it’s still another solid release in the Of Montreal catalog that will hold up well alongside its predecessors. —Aaron Frank