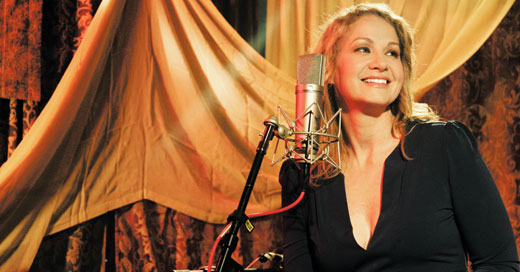 Joan Osborne may have grown up around here, but for years now she’s considered herself a New Yorker. Her latest album Little Wild One should convince the last doubters, as many of the songs repeatedly reference neighborhoods and landmarks of NYC — right up to the concluding “Bury Me on the Battery.” Louisville gets the singer back for a one-night visit Wednesday, with a concert at the Bomhard Theater at Kentucky Center. The event supports Dare to Care with what the singer considers “a win-win”: The $30 concert ticket is discounted to $25 if you come to the show with a non-perishable food item to donate. Showtime is 8 p.m.

Osborne’s new disc features a long-hoped-for reunion with the production/songwriting/instrumental triumvirate of Rick Chertoff, Rob Hyman and Eric Bazilian. The four previously worked together on Osborne’s Relish, which introduced millions to the singer’s capacity for blending various soulful styles and rootsy pop rock. LEO Weekly recently spoke with Osborne about revisiting this collaboration to make a New York record, plus soul music, theater gigs and other stuff.

LEO: How did you find the song “Cathedrals”? You do a lot of covers, but it’s unusual to hear you do one that started out in an indie band (Jump, Little Children).

Joan Osborne: I listened to it once and was completely sold on it …. That song, even though it was written before we started to get together and write, it could have been written expressly for this record. It seemed to fit so well with the sense of place and New York and also with the kind of notion of a secular hymn, which I was going for with a lot of the tunes.

LEO: I just read about a recent “tour warm-up” show you did in a very small club in Manhattan. You’ve also sung with ensembles based around reuniting Grateful Dead members, playing in front of large crowds. Do you have a favorite size or type of setting for live gigs?

JO: If I had to choose a favorite room, I guess it’d be the theaters, like in Louisville, The Palace, or in New York, it’s the Beacon … because they were built with music in mind. You can play in a tiny little club and there’s a certain little subtlety that you can bring to your performance that would be lost in a larger space. Then again, if you play in front of 20,000 people, that’s its own kind of high — getting in front of these big crowds, and the sheer force of it lifts you off your feet.

LEO: People are going to call this your “New York record,” and it seems to display that motif clear and powerful … such as its evocation of Walt Whitman. At what point in writing/song-selection/recording did this become clear?

JO: I’m not sure if there was a particular day or moment when it dawned on us. But I do think that in the aftermath of 9/11 … it just really turned me back toward an appreciation of the city. It gave me the notion of looking around me with fresh eyes again in a way that I did when I first moved here.

It also sent me back to the poetry of Walt Whitman, who is a great chronicler of New York City. He was writing in the 1800s, but I think there’s a lot of mirrors in what he was doing then and in what I experience as someone who lives here every day …. (That) gave me a renewed appreciation of his work as well, and those things kept bubbling up in the writing, and those were the phrases that kept attaching themselves to the songs and pieces of music that Eric and Rob and that all of us could come up with.

LEO: Is there any other album you’d recommend for its New York “sense of place”?

JO: The classic example would be the Lou Reed New York album. It’s almost like a collection of short stories about different things that happen in the city. Very much about this gritty street life view of the city, and very much through his particular personal lens — which can be a bit dark but also has a real hopefulness about it.

LEO: What are the people of Louisville to make of the degree to which you’ve embraced New York? Can you imagine that Louisville looks at you and says, “We’re proud, but … why weren’t we enough?”

JO: I do get pulled in two different directions whenever I visit family who still live in Kentucky and in the Louisville area. Seeing the way the city has changed in the years since I lived there, I’ll start looking in the real estate ads and start dreaming, “I could get a little house in the Highlands and live here part of the time.” It definitely pulls me whenever I go back home.

I think that if I had stayed in Louisville … I’m not saying I wouldn’t have had the opportunity to make music, but I don’t think I would have had the opportunity to learn as much as I did in as short a space of time from being part of a scene in New York. Simply because of the size of the town, and the fact that there were dozens of places featuring live music every night. I could go out any night of the week and see three or four of my friends’ bands playing. I think maybe when I was of the age to do that, it wasn’t really happening so much in Louisville. Not that I was aware of … at least, it wasn’t happening with blues music and roots music. It might have been happening more in the sort-of-punk scene, and I know that there have been great scenes … you know, with bands like Squirrel Bait.

LEO: Some people are saying that this is an age of renewal for soul music. You’ve awakened a lot of people to the works of the masters — but what do you think of newer soul artists?

JO: I’m a really big fan of Gnarls Barkley, and I think that they have something that really harks back to that classic soul era in the sonic palette that they use in their record(s). But they also do things that are very unexpected and more contemporary — and also just more off-the-wall.

I’m interested in what people do, like Cat Power — who’ll do a record in Memphis with Willie Mitchell and Teenie Hodges, and in the studio that turned out classic Al Green records. Writing her own songs that are not soul songs per se, but just take a page from that book and combine it with what she’s doing.

I think Amy Winehouse was successful at doing that with the Dap Kings, who are Sharon Jones’ band, and writing songs and material that you would not have heard in 1967 — not from any radio stations in Memphis or Detroit, or anywhere. —T.E. Lyons

On Thursday, Brooklyn’s leading citizen rolls into town for an intimate solo gig at the Brown Theatre (315 W. Broadway, 562-0100). Memphis-born Citizen Cope (aka Clarence Greenwood) first made a name for himself as a genre-blending DJ for the hip-hop outfit Basehead. In terms of performance, Cope is increasingly popular for his groovy mixture of folk, soul, rock and hip-hop, and is a perennial crowd-pleaser.

Jason Isbell hit the big time as a member of Southern rock stylists Drive-By Truckers. Known for an experimental spirit and bad behavior, the Truckers have become something of an institution throughout the land.

It is not surprising that Isbell’s well-crafted solo album, Sirens of the Ditch, has been making waves of its own. Isbell’s disc is currently in near-constant rotation on WFPK and is often sold out at ear X-tacy.

Moreover, in a live setting, Isbell has quickly earned a reputation as a first-rate frontman, a role he never had in the Truckers.

Soul music first caught fire 50 years ago in the American South. Usually described as a marriage of R&B and gospel, it boasted all the intensity of church music but delivered euphemistic lyrics and wicked horn sections rather than joyful hymns of praise.

Eli “Paper Boy” Reed & the True Loves would have been right at home on Stax or Atlantic. Even though Reed is a 24-year-old Jewish kid from the north, he possesses all the right sensibilities.

“Growing up in Massachusetts, my dad had a big record collection and played a lot the old stuff for me … blues and gospel and country and that sort of thing. Southern music in general had a big effect on me during my formative years,” Reed says.

After playing in Mississippi juke joints just long enough to earn a nickname (while sporting his grandfather’s ancient newsboy hat), the teenaged Reed returned to the Northeast and began busking around Harvard Square in Cambridge, Mass.

Looking to build upon his already solid foundation of Americana music, Reed eventually assembled a crew that shared his funky ambitions and were competent enough to take his music to the next level.

“I’d call what we do soul,” Reed says. “That is the best term for it. But the goal was never to piece together a ‘soul’ band. All the guys in this band are my friends. I didn’t have a predetermined sound in mind. I just wanted to work with people who I knew were good enough musicians to handle anything I threw at them. The idea was to let them each do their own thing within the parameters of the songs I write. I wanted the band to sound fresh and exciting and new and avoid playing the same old clichéd stuff.”

Reed’s resulting grooves are consistently well received by those in the know. Their Roll With You album has garnered favorable reviews from the likes of Nick Lowe, who called Reed’s “Take My Love With You” his favorite new song. NPR profiled The True Loves several times, and Rolling Stone picked Reed as one of its artists to watch.