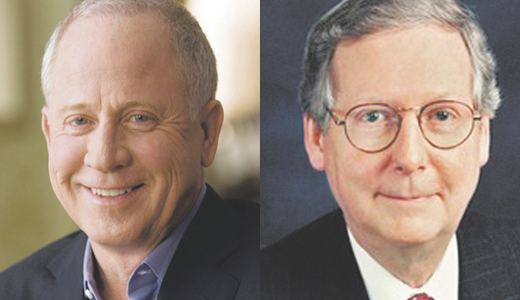 It’s probably safe to say we, the electorate, overstate the impact of our congressional representatives. As members of one of the two major parties, they are most often obligated to play team ball or face some untoward political consequence. Some control the agenda while others ride it. During campaign seasons, in part due to the wild concentration of political advertising and mainstream media coverage, we are made to believe our particular state is the center of the universe, which also does not extend beyond these United States. Incumbents tend to throw their weight around on the trail, stoking the distinct fear that, if they are unseated, the state will lose any access it has to the federal government.  This year, Sen. Mitch McConnell, the highest-ranking Republican in Congress, is in more danger of losing his seat than ever. Democrat Bruce Lunsford is polling a hair behind the four-term senator, and for every day the economy keeps tanking or the war keeps going or President Bush’s approval rating keeps sinking, Lunsford appears to gain. (A SurveyUSA poll released Tuesday showed the race tied, 48-48.)  Lunsford’s campaign narrative is change, while McConnell’s is access: He has brought hundreds of millions in pork to Kentucky. Lunsford’s campaign has downplayed this, saying the costs of the Iraq war and bailout — both endorsed by McConnell — far exceed the benefits of the senate minority leader’s pork.  Asked on several occasions for a sit-down interview, McConnell’s campaign ultimately failed to respond, while Lunsford offered this newspaper about 30 minutes face-to-face. McConnell has withdrawn from three debates, including one that would’ve been televised statewide. He gave The Courier-Journal editorial board 90 minutes last week; otherwise, he has been mostly absent from the state’s largest city, choosing instead to stick behind a series of shady, mostly misleading or false ads that assault Lunsford’s business past.  Of course, McConnell has a 24-year voting record from which to draw information (his campaign website features exactly zero policy positions), and some of his comments from the campaign trail offer insight into what a continuation of his congressional career might look like to Kentuckians. Here, a breakdown on three major issues.
The $700 billion bailout McConnell was among the chief negotiators of the $700 billion bailout package recently signed into law. “My view is that no action is not a plan,” McConnell told PolitickerKY.com. “If you are confronted with a problem you can do one of two things: You can run away from it or you can run toward it.” Philosophically, McConnell is quite far from the fiscal conservative some might believe him to be. He has voted against curbing federal pork spending, and was publicly admonished last month by the Club for Growth, a conservative economic group linked to the Republican Party, for voting in favor of four appropriations bills this year, three of which President Bush had threatened to veto for their obesity.  Lunsford, a millionaire businessman whose career has been in healthcare companies, has lamented the lack of federal regulation of the banking industry, and said in a recent interview that McConnell should bear some blame for the current economic condition, based on votes in the late 1990s to deregulate the financial sector. He said he favors some regulation, but in general, government should resist the urge to over-regulate. The bailout will cost Kentuckians over 18 years old about $2,300 each.
The Iraq war McConnell, among the most consistent and ardent supporters of the Bush administration’s war on Iraq, said last week he would still vote for the war, knowing now that the administration’s intelligence was wrong. As of now, all approved spending for the Iraq war, according to the nonprofit National Priorities Project, will cost Kentuckians $5 billion. That amount could’ve provided the state’s entire population with free healthcare for a year.  Lunsford has said repeatedly that Iraq was the wrong war, and that it took the country’s military focus off more pertinent struggles in Afghanistan. He said as senator, he would support a phased withdrawal and redeployment of troops. It is likely that as a freshman senator, Lunsford would follow the Democratic Party on this one.
Healthcare McConnell voted against expanding government-sponsored children’s health insurance, and his office was behind a GOP smear of 12-year-old Graeme Frost, a kid who had been elevated by Democrats as emblematic of the need for expanded health coverage for children. McConnell also voted against a bill requiring the government to negotiate prescription drug prices for Medicare part D. The American Public Health Organization has rated McConnell a zero for his congressional record on health issues.  Lunsford, somewhat infamously in certain Democratic circles, favors a market-driven healthcare system in which the states and federal government could use their collective bargaining power to force insurance and pharmaceutical providers to lower costs. He is decidedly against a single-payer healthcare system. Medicare, for instance, is a single-payer system, as are Britain’s and Canada’s.