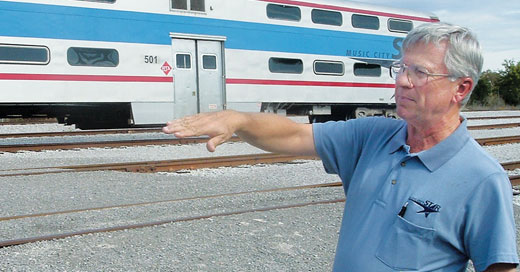 Nearly a century ago, if you were walking around downtown Louisville you were as likely to get run over by a trolley car as you were to step in horseshit. At her early zenith, Louisville was the 10th largest city in the nation, boasting a highly developed public transportation system on par with nearly any in the nation: electric street cars and trains buzzed through the heart of the densely packed Main Street, ferrying people across the region, while freight subways rumbled underneath the packed earth boulevards.

Then there was a flood, and that little thing called the Federal-Aid Highway Act of 1956. And in just a few decades, the trolley tracks were paved over, the horseshit exported to Lexington, and the city that had once been a regional hub of commerce dispersed its activity to the hinterlands via President Eisenhower’s sweeping vision of transformative concrete.

It would be an understatement to say that reconnecting Louisville with its buried, once-flourishing regional public transportation network has been like engineering pigs that can fly. Despite numerous failures on this front, the commuter rail hog is back on the table, in large part due to record-high gas prices, one of the worst carbon footprints in the nation, booming regional population and economic growth, and a newly resurgent urban core.

At the expense of extending this pork analogy to its limits: Are we finally willing to take a bite?

Looking to answer that question, Kentucky public transportation intelligentsia, city officials, rail advocates and reporters headed down to Nashville, Tenn., last Friday to ride the Music City Star, a fledgling regional commuter rail line. Organized by the Coalition for the Advancement of Regional Transportation and Kentucky-Indiana Rail Advocates, the trip offered the 20-person delegation a peek at the Star, a commuter rail that was financed on the cheap and has experienced a steady increase in ridership since its launch.

Spanning 32 miles from Lebanon, Tenn., to Nashville, the Star’s price tag ca-chings in at $41 million — $1.3 million per mile — making it the least expensive startup passenger rail system in the country. Funded by a hodgepodge of Federal Transit Administration, state and local matching funds, along with a rail-fuel tax, Nashville’s Regional Transportation Authority purchased the Star’s “used” passenger cars for the bargain price of $1 per car, and now operates the line. As of last Wednesday, the RTA reported a record 1,012 passengers, up 50 percent from last year.

“Everything that we’ve done here is bare bones and at low cost,” Music City Star Logistics Coordinator Gordon Smith shouted to our Kentucky delegation, now gathered in the RTA’s vast Lebanon rail yard amid the roar of various train-related hisses, clicks and mechanized rumbles. Smith acknowledged the difficulty the transit authority has faced in keeping the Star up and running — competition with highway construction (the Federal Highway Association awarded $7.3 million for startup expenses, meaning the Star and its supporters are thusly engaged in vicious mortal combat with the asphalt-establishment), media mischaracterizations overemphasizing initially lower-than-expected ridership, the failed re-election bid of the Star’s primary congressional backer and his less sympathetic replacement, and, if I heard correctly, a volcanic eruption that threatened to cover half the Star’s fleet in molten lava (like I said, the rail yard was noisy).

At one point someone asked if the exorbitant local price of gas (about $4.50 a gallon, due to Tennessee’s fuel shortage) has affected ridership. “I’ve got a spreadsheet,” Smith replied, “that shows a direct parallel between our ridership and the price of fuel.”

Aboard the Star, I conducted a straw poll among a full car of passengers to determine why they ride the train. Most said gas is way too expensive to not ride the train. Others cited the “hidden costs” of driving, such as auto maintenance and vehicular related deaths. One man from the upper deck explained: “I used to have to drive so much, get stuck in traffic, that when I’d come home I’d be too pissed off to enjoy myself. Now that I ride the train, I’m no longer upset by the time I get home. I’ve been spending more quality time with my wife, wanting to go out and have dinner.”

But like any public transportation system, the Star is not without its share of pitfalls. The RTA is poised to merge with its parent, Nashville Metro Transit Authority, citing a $1 million budget shortfall. And the shoestring-and-bubblegum funding at its center has yet to achieve sustainability, despite a $1 million infusion by the Nashville Metro Council and future ballot initiatives to approve additional tax allocation into a yet-to-be-created mass-transit funding entity.

Upon rolling into Nashville’s Riverfront Station, I stepped onto the platform to take in the warm late afternoon air, the visage of the skyline, and, much to my surprise, Louisville Metro Councilman Dan Johnson, D-21. The pro-light rail councilman had driven here to greet the delegation personally (and apparently to go flea market shopping).

I then noticed a gaggle of about 30 or so women whom had boarded early in our voyage, wearing ridiculous Derby-style hats and out-on-the-town ensembles, spilling onto the platform in a mass of multi-colored large-hattedness. Their ringleader, Sandra Hoskins, was celebrating her 70th birthday.

“We love riding the train,” she slurred. “And besides, we’ve already been drinking.”

So can this happen in Louisville?

The general consensus: it probably will, but no time soon.

Currently, Metro Council, TARC and the Kentuckiana Regional Planning and Development Agency (KIPDA) are studying a Star-like concept for a route that would serve Louisville, Fort Knox and Elizabethtown (among other stops). The proposal, championed by John Owen, KIRA member and participant in the 1990 Railroad Task Force, envisions a traditional rail-based commuter line parallel to Highway 31-W (Dixie Highway), which would be far cheaper than previous light rail proposals for several reasons — the existing track, owned by the Paducah & Louisville Railway, is in “excellent shape,” reducing startup costs exponentially because the rail is already there, and because P&L owns the rights-of-way, eliminating massive legal costs.

Another plan involves servicing a path along the Frankfort Avenue CSX tracks, but “that’s putting the cart before the mule,” Owen said, referring to the eagerness of the P&L to work with them and the reluctance of CSX. Though traffic migration is greater along Interstate 64 than along Interstate 65, advocates are putting more stock into what can actually be accomplished. Add to the pot a recently announced contract to expand Fort Knox (creating 5,000 new jobs in the area), mix well, and voila, economic opportunity abounds.

Metro Councilman Bob Henderson, D-14 — whose palpable excitement while watching the Star’s conductor pulling levers and pushing buttons could be felt from a few feet away — cited the Fort Knox contract as sine qua non for the rail’s inevitability.

Yet money, far and away, is tantamount. Though any Louisville plan likely would be as cheap as the Music City Star, it would require large initial investments and subsidies to avoid most of the problems currently plaguing the Star.

“They’ve got no reliable source of funding,” Stacey Burton, transportation planner for KIPDA, said of Nashville’s Regional Transportation Authority. “If you’re going to do something like rail, you need reliable, continuous funding. The fact that they want to axe it already is scary.” On whether it can happen here: “The possibility is there, but it depends on any number of external factors … but basically, every part and parcel of the community would have to come out and show support for something like this.”

Cultivating that kind of expansive public support is what David Morse does best. “We feel that if you educate people about these options, and the more they understand them, then the more they’ll grow to support them,” said Morse, a local grassroots alternative transportation standard-bearer and current president of CART.

With the help of public donations and with Metro Council offering matching funds, CART and KIRA are planning another opportunity for the public to experience what Louisville might be like with commuter rail. On Nov. 8, the groups will offer a train ride along the proposed P&L leg. “Space is limited,” Morse said, suggesting a large ratio of the passengers will be of the mover-and-shaker set.

“Support from the business community (for public transit) is an ecological niche that hasn’t been filled in the city yet,” he said, speculating that maybe Humana ought to jump on board. “I think maybe in a couple of years, (they) might be ready for it. We’ll see.”

For all the myriad hurdles involved, there exist few tangible solutions. Any transit models, a la the Star, which manage to fit within the context of our customarily limited tax pool offer us, at the very least, insight on how we ought not do it. Though Nashville is learning from its mistakes and redoubling in an effort to “surge” new life into their fledgling Star, Louisville has yet to take the leap. Thus we remain one of the five largest metropolitan areas in the nation lacking any form of modernized public mass transit. And thus we remain a city where three out of every four employed citizens drive to work in a car — alone.

In the predominately car-based culture of the southeastern United States, Nashville, Miami and Atlanta are developing ambitious transportation projects that reflect the growing trend of increased urbanization, less vehicular fetishism, and an existence that doesn’t involve the static, far-flung gated communities of the past, but embraces the dynamic, increasingly-mobile urban culture of tomorrow (and even today).

Of all of the people I talked to, it was Lynn Soporowski — a transportation engineer with the Kentucky Transportation Cabinet — who best honed in on this philosophical disconnect underlying the ubiquitous dollars-and-sense argument. For viable public transportation to exist in Kentucky, she said, “then there has to be a fundamental paradigm shift in the American Dream,” one in which the controlled private space of the automobile is coupled with the timetables and public space of the train.