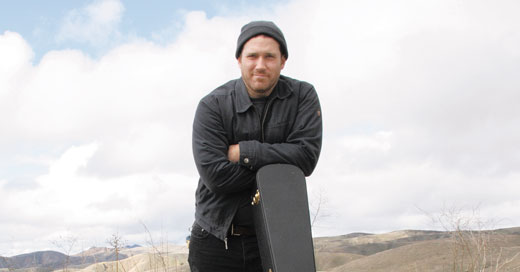 Balanced by the twin guitar-and-vocal attack of Chuck Ragan and Chris Wollard, Hot Water Music made more than a few pilgrimages to Louisville: the now-defunct Sparks club on Main Street, Krazy Fest at the Water Tower and Bellarmine’s Horrigan Hall. HWM’s lyrics were about blue-collar folks engaging in soul searching and self-reliance. If you don’t own Forever and Counting, Caution or Live at The Hardback, you’re missing out.

Hot Water Music didn’t break up so much as go on indefinite hiatus — one of many throughout its decade-plus career — until a slew of reunion tours on both coasts brought it all back home again.

Wollard and the remaining members have since released albums under the moniker The Draft, while Ragan regrouped, moved to California and began a solo career. The contractor has turned down the volume, but not the spirit.

He, Tim Barry (from Avail) and Lucero’s Ben Nichols are playing in the round Saturday as part of The Revival Tour, a name Ragan and his wife settled on to reference their appreciation of The Grand Ole Opry. His tourmates shared the sentiment.

“When Tim and I were talking about what (Revival) meant to us, what we’re doing right now is reviving what is there, the reasons why we picked up a guitar in the first place,” Ragan says.

“For me, personally, it started more so as a rebellion and as an expression. There’s definitely a strong sense of intimidation when you stand up by yourself. In that way, it feels like it’s back to square one.”

Ragan’s growl, once surrounded by walls of impenetrable distortion, has been replaced by a calmer, determined cadence (Los Feliz and Feast or Famine).

“It was my wife who was the one who actually encouraged me. I was sitting around the house one day, and she said, ‘You should get out and record some of that stuff,’ and then she came home and said, ‘Guess what, you’ve got a show.’” It was a friend’s birthday party, opening for Samiam.

“When you’re playing acoustic, you’re cutting yourself open for everybody,” Ragan says. “If you mean it, and you believe in it, you’re wearing your heart on your sleeve, and there’s nothing much to hide behind. It’s both scary and liberating.”